Animation Rules!: Book One: Words: Being a series of lectures on the theory, practice, aesthetics, history and personal experiences of t (Paperback) 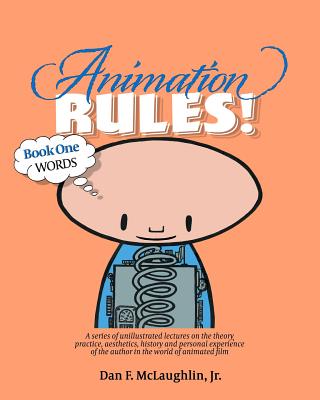 This book is a distillation of a lifetime in film that discusses the theory, practice, aesthetics, history and personal experiences of the author in the world of animated film. From advice to the most mundane, such as using 3X5 cards for storyboards vs. using store-bought panels, to the most practical, like what to do when a producer proposes not paying one for the "experience" of a professional job, the book is a wide raging look at the animation industry. An innovative teacher as well as animator, the book extensively covers teaching strategies, syllabuses and exercises to assist teachers in their own teaching environment. The over 1000 illustrations which accompany this text are included in Animation Rules Book Two Art. If the philosophy of the UCLA Animation Workshop is One Film, One Filmmaker the philosophy of this book is Two Books, One Field.

After a childhood spent as an extra in Hollywood, Dan graduated in 1958 from the UCLA Theater Arts Department (now the UCLA School of Theater, Film and Television), and began working that same year at the Animation Workshop, founded in 1948 by former Disney animator Bill Shull. When Shull retired in 1970, McLaughlin assumed his post, and in 1971, founded the School's M.F.A. Animation Program. As an independent filmmaker, McLaughlin made more than 20 animated films, ranging from the traditional to the experimental, which earned both national and international recognition. His kinestasis student film God is Dog Spelled Backwards (1963) featured 3,000 years of art in three minutes set to Beethoven's 5th Symphony. It achieved national fame in June 1968 on The Smothers Brothers Comedy Hour when the imagery was accompanied by composer Mason Williams' composition Classical Gas. His film Claude (1963) was a winner at the Chicago International Film Festival. Other credits include animation for Sesame Street, the Amnesty International Human Rights Now 1988 world tour and numerous titles for feature films. McLaughlin was also a pioneer in the fields of computer animation and interactive media. He introduced computer animation to the Workshop in 1968 and interactive animation in 1988; in 1991 he developed AIA, a laser disk multimedia critical analysis system for animation. He served on ASIFA Hollywood's board of directors, and in 1995, McLaughlin was the recipient of ASIFA Hollywood's Winsor McCay Award for lifetime achievement in animation. At the time of his retirement in 2007, the Animation World Network estimated that he had taught animation to 800 students and been an advisor on nearly 700 animated films.