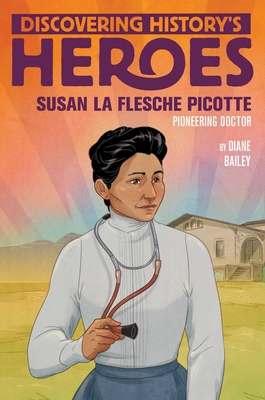 By Diane Bailey
$18.99
Unavailable, Out of Stock, or Out of Print

Jeter Publishing presents a series that celebrates men and women who altered the course of history but may not be as well-known as their counterparts. In this middle grade biography, learn about Susan LaFlesche Picotte, the first Native American woman to earn a medical degree.

Susan LaFlesche Picotte was the first Native American doctor in the United States and served more than 1,300 patients over 450 square miles in the late 1800s.

Susan was the daughter of mixed-race (white and Native American) parents, and struggled much of her life with trying to balance the two worlds. As a child, she watched an elderly Omaha Indian woman die on the reservation because no white doctor would come help. When she grew older, Susan attended one of just a handful of medical schools that accepted women, graduating top of her class as the country’s first Native American physician.

Returning to her native Nebraska, Susan dedicated her life to working with Native American populations, battling epidemics from smallpox to tuberculosis that ravaged reservations during the final decades of the 19th century.

Blizzards and frigid temperatures were just part of the job for Susan, who took her horse and buggy for house calls no matter what the weather conditions. Before her death in 1915, she also established public health initiatives and even built a hospital.

Diane Bailey has written more than fifty nonfiction books for children and young adults. Her most recent titles include books in The Great Outdoors series (Survival Skills, Mountain Biking, Discovering Nature, Water Sports, and Snow Sports), the Black Achievement in Science series (Biology, and Physics), and A First Look at America’s Presidents series (James K. Polk, John Quincy Adams, and William McKinley). She is also a journalist whose work has appeared nationally.