Secrets Behind the Big Pencil: Inspired by an Actual Scandal (Paperback) 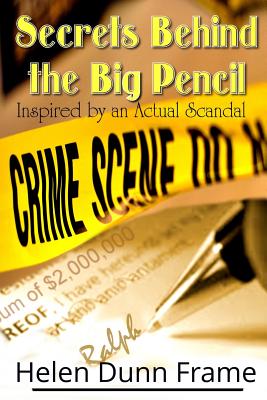 Between the covers of a fictional book that features elements of reality: To look at imposing Ralph Carter no one would guess that events in his childhood haunt him and affect his behavior. Memories of being accused of murdering his older brother and shadowy feelings of child abuse by his drunken father constantly creep into his psyche.Marrying Cynthia before he gets a long delayed promotion to Assistant Buyer and a transfer to Germany by the Military Support System (MSS), and having two daughters he adores, tricks him into believing he has overcome his past. Things change when she asks for a divorce and reveals shocking information about herself. Ralph is plummeted back in time with visions of imagined things on the ceiling and insomnia.Then a major scandal in Europe involving buyers accepting kickbacks, gifts, and sexual favors from vendors causes him to vow never to give into such temptations. Like New Years' Resolutions, the good intentions fade when he becomes a Buyer in the San Francisco region. There he deals with an ogre for a boss, sabotage by an alcoholic associate who feels she deserved his job, and striving to be accepted as a team player. Wanting to provide a good life for his family, he vacillates between staying with the government organization and finding another job as another scandal explodes.

Helen Dunn Frame, an accomplished businesswoman (formerly a commercial real estate broker in the Dallas/Fort Worth Metroplex, specializing in retail and restaurants), developed professional writing skills. Plus, living in England, Germany, and Costa Rica; and her love of travel (in 50 countries at least once where she gained an appreciation of the value of diverse cultures) have provided background for several books. Helen wove many threads of her experiences into the fabric of GREEK GHOSTS soon to be followed by the second in the mystery series, WETUMPKA WIDOW. Living in Dallas during a major scandal resulted in SECRETS BEHIND THE BIG PENCIL. Expecting to update to a third edition this year, Helen advises Baby Boomers in her book about RETIRING IN COSTA RICA or Doctors, Dogs and Pura Vida. A graduate of Syracuse University (Journalism School), and New York University (Master's Degree in Sociology/Anthropology), major newspapers and magazines as well as trade publications in the United States, Costa Rica, England, and Germany have published her writing. She has edited newsletters and a newspaper and other author's books, created business proposals for clients, and spoken to groups.