Happiness as Actuality in Nicomachean Ethics: An Overview (Paperback) 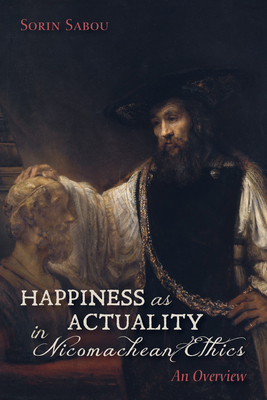 This is a study about the meaning of happiness (εὐδαιμονία) in Aristotle's Nicomachean Ethics (EN). It is argued that εὐδαιμονία in EN means actuality, and it has to be interpreted through the lenses of two metaphors used by Aristotle in EN 1.7 1098a21 and 10.6 1176a30: the perimeter of good and the imprint of happiness. To explain the meaning of happiness Aristotle first has to delineate the perimeter of good of human beings, and he does that with the help of two criteria: the final end τέλος] and the function of humanity ἔργον ἀνθρώπου]. These two criteria are metaphysical concepts which describe the good as the final metaphysical aim of every person, and the best every person can be. This metaphysical teleological aim is the actuality of the soul according with excellence. This is the perimeter within which Aristotle enquires about εὐδαιμονία--the good of humans.

Sorin Sabou is the Prorector of Baptist Theological Institute of Bucharest. He is the author of Between Horror and Hope: Paul's Metaphorical Language of Death in Romans 6 (2005), and The Cross to Rome (2014).