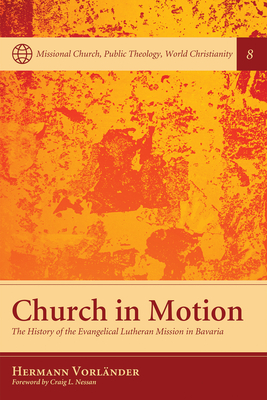 ""Mission is nothing but the one church of God in motion."" With these words the famous German Lutheran theologian Wilhelm Loehe described the essence of missionary work. Mission moves the church and crosses boundaries to form the one universal church. In 1842, Loehe started missionary work in the small Bavarian town of Neuendettelsau in southern Germany, as he sent two young men as ""emergency helpers"" to North America. He supported the formation of Lutheran congregations that later joined together to become the Evangelical Lutheran Church in America (ELCA) and the Lutheran Church-Missouri Synod (LCMS). Together with Friedrich Bauer he founded a mission seminary that sent, until 1985, nearly 900 graduates as pastors and missionaries not only to the USA, but also to Australia, Papua New Guinea, Brazil, Africa, Eastern Europe, and Palestine. From this the present center Mission One World of the Evangelical Lutheran Church in Bavaria developed, which maintains partnership relations to churches in Africa, Asia/Pacific, and Latin America. This book describes the history of this missionary movement up to the present time and puts the Bavarian missionary work into the context of mission theology and strategies in the twentieth century. ""Out of an obscure village in Germany emerged a church in motion that has changed the globe This is at the heartbeat of the amazing story documented in this book, which begins with Wilhelm Loehe. Hermann Vorlaender is one of his successors, who knows this history from the inside out, having served many years as director of the missional institution Loehe grounded. Detailing the historical developments among the global partner churches through relationships of accompaniment extending from Neuendettelsau, the book locates these efforts in relationship to many other mission institutions that also were at work during this fruitful period. Even more insightful is the analysis of the diverse meanings of mission that come to expression through this history."" --Craig L. Nessan, Wartburg Theological Seminary, Dubuque, Iowa ""The mission movements among German Protestants in the nineteenth century involved a radical premise: that the life and work of the church transcends national boundaries. Vorlaender's excellent and comprehensive account of the Neuendettelsau Mission, originating with Wilhelm Loehe and Friedrich Bauer's efforts among German immigrants and Native Americans in North America, shows how this new and generative understanding of the church's mission has unfolded in the context of Bavarian Lutheranism. The impact continues to this day in the emergence of the church as a trans-national, global communion."" --Thomas H. Schattauer, Professor, Wartburg Theological Seminary, Dubuque, Iowa Hermann Vorlander worked as professor at the Near East School of Theology in Beirut (Lebanon) and until 2007 as executive director of Mission One World--Centre for Partnership, Development and Mission of the Evangelical Lutheran Church in Bavaria (Germany).