The Acme and the Textbook of Christian Science (Paperback) 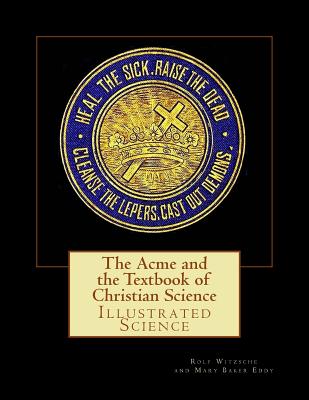 This book is dedicated in honor of Mary Baker Eddy, one of the greatest scientific geniuses of the 19th and 20th Centuries. Her stature as a world-historic person reflects a number of pioneering achievements that she is widely honored for, which have uplifted the face of civilization in numerous respects. She is noted for her dedication to advancing the status of women; for ennobling Christianity with a scientific dimension; for reinstating its nearly lost element of Christ-healing; for her discovering and founding of Christian Science, and the writing of its textbook; for establishing a world-wide church and ordaining for it two impersonal pastors, the Bible and her textbook; and not least for her founding of the international newspaper, The Christian Science Monitor. However, these types of biographies rarely focus on her accomplishments as a pioneer in the scientific dimension where she was so far advanced of her time that she noted that "Future ages must declare what the pioneer has accomplished." These words remained on the first page of the preface of her textbook on Christian Science, Science and Health with Key to the Scriptures, which she had constantly revised and upgraded in the course of more than 400 editions of the book, keeping the book in line with her own scientific development over the space of 35 years since its first publication. In celebrating the150th Anniversary of her discovery of Christian Science, it is appropriate that the historic dimension of Mary Baker Eddy be enriched in appreciation with a specific focus on the scientific aspects of her work. This is the purpose of this book. Mary Baker Eddy has accomplished enormously on this front, far more than what society gives her credit for, most of which remains generally unknown. If a historian had asked her in her time what she had most wished for in her life, she might have answered that she had labored for 44 years to give to humanity the clearest sense possible of the "acme" of Christian Science., which means that all her other accomplishments where created subsequent to it, and reflect it. But what was her sense of the "acme" of Christian Science, as she used the phrase at the end of the last chapter of her textbook? The answer was not provided. She gave hints of how it may be discovered, since Christian Science was a discovery from the beginning. She left the answer for future ages to declare, when society would be sufficiently advanced to take note of the scientific dimensions that she had incorporated into her work, by which they would become discovered and be advanced. The book presented here is a unique 150the Anniversary Edition of the Christian Science textbook, Science and Health with Key to the Scriptures. As such, it incorporates several unique features. The book begins with a giant table of contents that lists all subheadings that Mary Baker Eddy has applied as marginal headings. The result is a comprehensive list of topics that Mary Baker Eddy had dealt with. One might call this opening part of the book: Ask Mary Baker Eddy The 150th Anniversary presentation that I have prepared, also has numerous features incorporated for reference purposes that pertain to what Mary Baker Eddy has termed the "acme" of Christian Science, referencing St. John's city foursquare that she has brought all of her major works into. I have produced this book in part for my own use, for its valuable reference features, but am glad to share it with anyone interested in extensive, deep-reaching, Christian Science research work, and the resulting scientific and spiritual development that it enables.