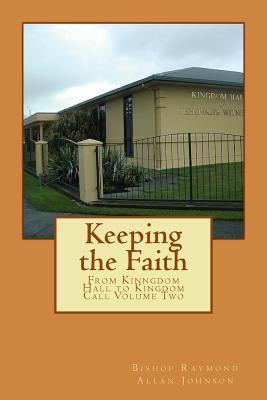 This book is a sequel to Bishop Johnson' semi-autobiographical work, entitled from Kingdom Hall to Kingdom Call. In the first book Bishop Johnson talked about his experiences growing up in the Jehovah's witness religion, and attending meetings at the Kingdom Hall. Volume Two - Keeping the Faith - is the story of what happened next, and of what has happened over more than four decades, since leaving the Jehovah's witnesses behind, and becoming a Christian. From preaching his initial sermon, in 1975; to embracing Pentecostalism; to Consecration into the sacred office of the Episcopacy, and ministry in the underground House Church movement, in the Peoples Republic of China, leaving the Watchtower was the beginning of a very fulfilling journey of faith.

Bishop Raymond Allan Johnson was raised a Jehovah's witness. He remained in the religion until he was twenty-three years of age. After leaving the Watchtower he joined the Nation of Islam, briefly; and then eventually accepted Christ. His career in ministry now spans more than four decades; and includes ministry in various parts of the United States, as well as the Peoples Republic of China.