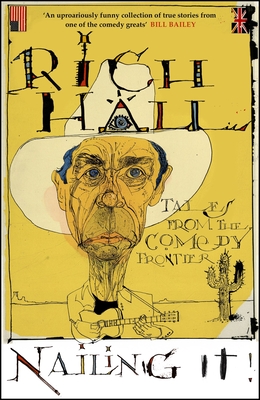 A collection of hilarious and often absurd epiphanies in the legendary comedian's life that defined him - more in a for worse than for better kind of way - and all delivered in his unique deadpan style.

Growing up, Rich Hall aspired to be a writer, and after school he trained to be a journalist. But after a stint at the Knoxville News Sentinel in Tennessee, he found himself trying to impress a girl by doing a one-man show in a state university campus in Kansas, armed with a bucket, a bullhorn and some dog biscuits. It wasn't exactly a triumph, and he didn't get the girl, but he had found his true calling.

Nailing It is a collection of true stories from both Hall's professional and personal life where he really had to nail it. They're not about glitz, or fame, or how he met his seventh wife at the rehab clinic and found spiritual direction. None of that happened to him. They're about accidentally melting Kraft cheese at his first Edinburgh Fringe Festival, alienating an entire convention of RV holiday-makers in Las Vegas, singing The Who's 'You Better You Bet' at a charity gig and turning his performance into a legendary rock'n' roll disaster, and attempting to seduce Karen, which must have been successful because she is now his wife. And other such escapades. Hall doesn't always come out of them all covered in glory - far from it - but if someone propped him up at the end of the comedy bar and put a 50p coin in him, these are the tunes he would spin. And you'd be laughing all night.

Rich Hall is a multi award-winning American comedian, musician and author. In the US he wrote for David Letterman and appeared on David's show frequently as a guest. He was also a cast member and writer for Saturday Night Live, Fridays and Not Necessarily The News. In 1998, he created his alter-ego Otis Lee Crenshaw, a redneck jailbird from Tennessee, which won him a Perrier Award at Edinburgh in 2000. He moved to the UK in 2001, and has been touring the country and appearing on numerous British TV Shows since, including Have I Got News For You and QI (he once held the record for the most 'wins'.) Rich has also written and presented ten highly acclaimed documentaries for BBC Four. He lives with his wife, Karen, alternating between homes in West London and Livingston, Montana. Nailing It is his fourth book.