Rubin and the lost horse of Merrithorpe: A story with illustrations, magic and riddles (Paperback) 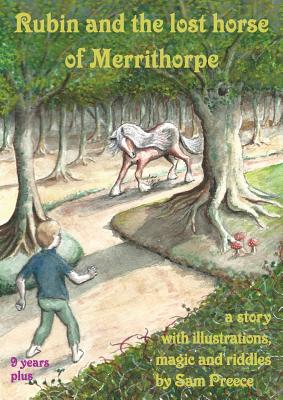 Rubin and the lost horse of Merrithorpe

This story is about an orphan boy called Rubin, who in his wanderings meets a runaway horse.
Before galloping away, its prancing and posturing suggests that the horse is trying to convey a message.

Then Rubin finds the first and soon after, the second of four curiously numbered golden horseshoes lying on the ground.
The crone (a wise woman) sees the boy picking up the first shoe. She explains that the horse had been acquired by the Grand Duke of Merrithorpe from a horse coper and it won't stay with him because he doesn't know its name.
From then on Rubin's quest is to discover its name and return the horse.
In Merrithorpe village Rubin meets a signwriter, later becoming his apprentice.
He finds the third horseshoe on the village green.
He is taught his alphabet, numbers and MATH-ER-MAGICS at a Dame school. (The Dame is the second wise woman).
He meets the smith who made the golden horseshoes and a tailor who makes him a suit,
A third wise woman, a clairvoyant who can translate horse language is consulted.
The translated horse message is a riddle which can solve the horse's name. Rubin sets out on an exciting adventure to the Land-of-Un where he recovers the horse.

Chased by the unscrupulous horse coper and his men, the effort brings both horse and boy close to death as they emerge from a perimeter hedge of poisonous thorns. There, the combined efforts of the crone and the clairvoyant (who provides an appropriate riddle for the crone to solve), revive both horse and boy.

Rubin returns the named horse to the Grand Duke but decides to keep the three horseshoes until he finds the fourth. He is given a final riddle by the Clairvoyant and this leads him to a girl who keeps chicken, the fourth horseshoe, and of course to a happy conclusion for all concerned (except the horse coper).