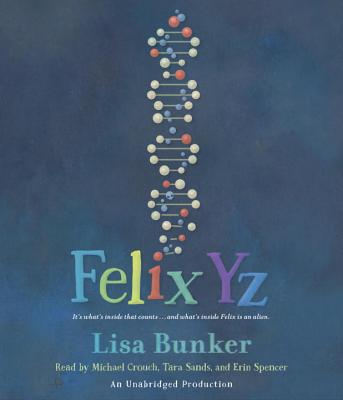 By Lisa Bunker, Michael Crouch (Read by), Tara Sands (Read by), Erin Spencer (Read by)
This Book Is Not Sold Online - Inquire In Store
Not In Stock/Special Order

“If it wasn’t for the fused-with-Zyx thing, I suppose I would just be normal—whatever that means.”

When Felix Yz was three years old, a hyperintelligent fourth-dimensional being became fused inside him after one of his father’s science experiments went terribly wrong. The creature is friendly, but Felix—now thirteen—won’t be able to grow to adulthood while they’re still melded together. So a risky Procedure is planned to separate them . . . but it may end up killing them both instead.

This book is Felix’s secret blog, a chronicle of the days leading up to the Procedure. Some days it’s business as usual—time with his close-knit family, run-ins with a bully at school, anxiety about his crush. But life becomes more out of the ordinary with the arrival of an Estonian chess Grandmaster, the revelation of family secrets, and a train-hopping journey. When it all might be over in a few days, what matters most?

Told in an unforgettable voice full of heart and humor, Felix Yz is a groundbreaking story about how we are all separate, but all connected too.

Lisa Bunker recently left a thirty-year career in public and community broadcasting to write full-time. She lives in Exeter, New Hampshire, and does not play chess as well as she would like, but still plays anyway. Find her on Twitter @LisaBunker.

★ "Captivating . . . Felix's story is a love letter to anyone who feels out of place and a testament to the beauty of being 'different.'" —Publishers Weekly, starred review

★ “Lisa Bunker's clever science fiction debut is heartwarming and witty. Felix's looming high-stakes procedure creates a sense of suspense, while the push and pull between Felix and his alien guest incubates humor, compassion and ingenuity . . . The marvelously diverse cast of Felix Yz is certain to charm audiences and leave them eagerly anticipating what Bunker will deliver next.” –Shelf Awareness, starred review

★ "[A] charming, engaging, humorous, and heartrending tale of self-awareness and coming of age." —School Library Journal, starred review of the audiobook

“If you think a boy with an alien inside of him doesn’t have a whole lot to teach you about life and love and the ways we are connected to each other, then you’ve never met Felix Yz. Felix would be wholly original even if he didn’t have an alien inside of him—which is part of the beauty and awe of this book. Between Felix and Zyx and family secrets and chess and that fated first crush feeling, Lisa Bunker shows us all the subtle ways we are connected and what it means to risk everything, just by being ourselves.” —Bonnie-Sue Hitchcock, author of the Morris Award finalist The Smell of Other People’s Houses

"A one-of-a-kind story . . . Like the sweet older brother of middle grade series such as “Diary of a Wimpy Kid” and “Dork Diaries,” this title, with its combination of light sci-fi and relatable stakes, should appeal to younger teens." —School Library Journal

"An original take on classic themes of family acceptance and middle-grade love. There are plenty of laughs to be had in this lovable debut. Bunker is an author to watch." —Booklist

“In this highly original, beautifully crafted debut, the characters are each unique, yet present with a next-door neighbor quality with which readers will relate, despite the differences they may bring to their reading . . . Perfectly paced and thoroughly engaging, this novel bestows upon the reader a brilliant opportunity to reflect upon issues of identity and trust; to contemplate Zyx’s otherworldly joy of living; and to marvel at the universality of emotion.” —VOYA

"A sweet and thoughtful story of bravery and becoming.” —The San Francisco Chronicle

"The palpable vulnerability with which Felix describes his fears is powerful, and readers will likely be rooting for him to survive the separation and have a chance to thrive as just Felix. Sci-fi fans who also appreciate realistic fiction will find this perfectly straddles the contemplative tone of an introspective teen with the futuristic view of a contemporary world." —BCCB

"The novel’s premise allows for fascinating reflections on . . . ways of feeling different, and debut author Bunker inventively pulls it off." —The Horn Book