Genius Makers: The Mavericks Who Brought AI to Google, Facebook, and the World (Hardcover) 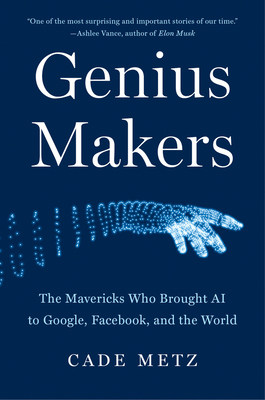 THE UNTOLD TECH STORY OF OUR TIME

What does it mean to be smart? To be human? What do we really want from life and the intelligence we have, or might create?

With deep and exclusive reporting, across hundreds of interviews, New York Times Silicon Valley journalist Cade Metz brings you into the rooms where these questions are being answered. Where an extraordinarily powerful new artificial intelligence has been built into our biggest companies, our social discourse, and our daily lives, with few of us even noticing.

Long dismissed as a technology of the distant future, artificial intelligence was a project consigned to the fringes of the scientific community. Then two researchers changed everything. One was a sixty-four-year-old computer science professor who didn’t drive and didn’t fly because he could no longer sit down—but still made his way across North America for the moment that would define a new age of technology. The other was a thirty-six-year-old neuroscientist and chess prodigy who laid claim to being the greatest game player of all time before vowing to build a machine that could do anything the human brain could do.

They took two very different paths to that lofty goal, and they disagreed on how quickly it would arrive. But both were soon drawn into the heart of the tech industry. Their ideas drove a new kind of arms race, spanning Google, Microsoft, Facebook, and OpenAI, a new lab founded by Silicon Valley kingpin Elon Musk. But some believed that China would beat them all to the finish line.

Genius Makers dramatically presents the fierce conflict between national interests, shareholder value, the pursuit of scientific knowledge, and the very human concerns about privacy, security, bias, and prejudice. Like a great Victorian novel, this world of eccentric, brilliant, often unimaginably yet suddenly wealthy characters draws you into the most profound moral questions we can ask. And like a great mystery, it presents the story and facts that lead to a core, vital question:

How far will we let it go?

Cade Metz is a technology correspondent with The New York Times, covering artificial intelligence, driverless cars, robotics, virtual reality, and other emerging areas. Previously, he was a senior staff writer with Wired magazine. He works in The New York Times’ San Francisco bureau and lives across the bay with his wife, Taylor, and two daughters.

"In Genius Makers, Cade Metz delivers the definitive take on how AI technology came to be and what its arrival will mean for us humans. The book relies on tireless reporting and delightful writing to bring to life one of the most surprising and important stories of our time. If you want to read one book to understand AI, this is the one."
—Ashlee Vance, New York Times bestselling author of Elon Musk

"This colorful page-turner puts artificial intelligence into a human perspective. Through the lives of Geoff Hinton and other major players, Metz explains this transformative technology and makes the quest thrilling."
—Walter Isaacson, #1 New York Times bestselling author of Leonardo da Vinci, Steve Jobs, and The Innovators

"Cade Metz has produced an enthralling narrative of the advance of artificial intelligence. He describes the key personalities, the seminal meetings and the crucial breakthroughs with his customary eye for detail, building them into a dramatic history of this era-defining technology."
—Kai-Fu Lee, author of AI Superpowers

"This is the inside story of how AI entered Google, Facebook, and the rest of high tech.  It is also the story of how Silicon Valley and its megabucks infiltrated AI and changed its course. Chock-full of behind-the-scenes anecdotes and wry humor—we learn the true tale of the technology that is transforming humanity."
—Oren Etzioni, chief executive, Allen Institute for Artificial Intelligence

"One day soon, when computers are safely driving our roads and speaking to us in complete sentences, we'll look back at Cade Metz's elegant, sweeping Genius Makers as their birth story—the Genesis for an age of sentient machines."
—Brad Stone, author of The Everything Store and The Upstarts

Genius Makers is an enthralling, definitive modern history of artificial intelligence. Cade Metz's detailed narrative reveals the crucial decisions made by executives, developers and investors––and foreshadows the disproportionately large effect they will have on our futures.
––Amy Webb, author of The Big Nine: How the Tech Titans and Their Thinking Machines Could Warp Humanity