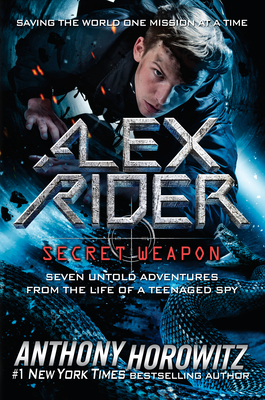 By Anthony Horowitz
$17.99
On Our Shelves Now - Please allow up to 48-hours for Curbside Pickup orders to be processed.

"Readers ages 8 to 15 with a taste for tough-guy thrills will gobble this one up."--Wall Street Journal


Inspired by Horowitz's millions of fans worldwide, Secret Weapon expands the world of Alex Rider with more thrilling action and pulse-pounding heroics. Follow Alex as he infiltrates a terrorist hideout in Afghanistan, fights to prevent an assassination attempt at a ski resort over Christmas, and much more! The #1 New York Times bestselling Alex Rider is back with more exciting, edge-of-your-seats adventures!

Contains a combination of new and previously published material, together for the first time!

Praise for Never Say Die:
"Once again amid races, chases, hails of bullets, and increasingly spectacular explosions, the teenage James Bond pulls off one awesome feat of derring-do after another. [This] fresh caper . . . roars along to a (naturally) explosive climax." --Booklist

Anthony Horowitz is perhaps the busiest writer in England. He has been writing since the age of eight, and professionally since the age of twenty. He writes in a comfortable shed in his garden for up to ten hours per day. In addition to the highly successful Alex Rider ongoing series of books, he has also written episodes of several popular TV crime series, including Poirot, Murder in Mind, Midsomer Murders, and Murder Most Horrid. He has written the television series Foyle's War, which aired in the United States, as well as the libretto of a Broadway musical adapted from Dr. Seuss's book, The 5,000 Fingers of Dr. T. He penned the script for the film The Gathering, which was released in 2003, starring Christina Ricci. Horowitz has also written the Diamond Brothers series.