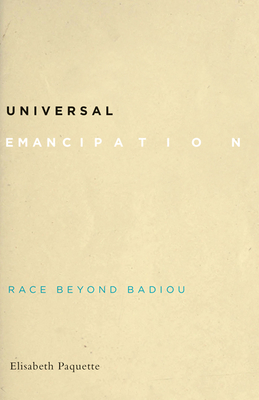 Is inattention to questions of race more than just incidental to Alain Badiou’s philosophical system? Universal Emancipation reveals a crucial weakness in the approach to (in)difference in political life of this increasingly influential French thinker. With white nationalist movements on the rise, the tensions between commitments to universal principles and attention to difference and identity are even more pressing.

Elisabeth Paquette’s powerful critical analysis demonstrates that Badiou’s theory of emancipation fails to account for racial and racialized subjects, thus attenuating its utility in thinking about freedom and justice. The crux of the argument relies on a distinction he makes between culture and politics, whereby freedom only pertains to the political and not the cultural. The implications of this distinction become evident when she turns to two examples within Badiou’s theory: the Négritude movement and the Haitian Revolution. According to Badiou’s 2017 book Black, while Négritude is an important cultural movement, it cannot be considered a political movement because Négritude writers and artists were too focused on particularities such as racial identity. Paquette argues that Badiou’s discussion of Négritude mirrors that of Jean-Paul Sartre in his 1948 essay “Black Orpheus” that has been critiqued by leading critical race theorists. Second, prominent Badiou scholar Nick Nesbitt claims that the Haitian Revolution could only be considered political if its adherents had shifted their focus away from race. However, Paquette argues that not only was race a central feature of this revolution but also that the revolution ought to be understood as a political emancipation movement.

Elisabeth Paquette is assistant professor of philosophy and women’s and gender studies at the University of North Carolina at Charlotte.

"Elisabeth Paquette has given us the book we needed about the radical French philosopher Alain Badiou, in large part because it is not a book about Badiou at all. Rather, by staging an encounter between Badiou and Sylvia Wynter, she sheds light on the limits of European radical thought in general and race-blind approaches to universal emancipation in particular."—George Ciccariello-Maher, author of Decolonizing Dialectics

"Elisabeth Paquette offers a bold and incisive intervention into contemporary debates in political theory around questions of race, colonialism, and liberation. Universal Emancipation is a vital, timely, and important work that will prove an invaluable resource as we confront the ongoing legacy of racism and colonialism in the present moment."—Michael J. Monahan, author of The Creolizing Subject: Race, Reason, and the Politics of Purity