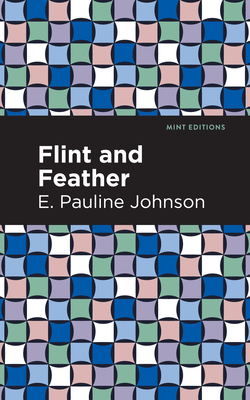 Flint and Feather (1913) is a collection of the complete poems of E. Pauline Johnson. Revered as one the foremost Canadian poets of her time, Johnson was a prolific writer whose works explored her Mohawk heritage while shedding light on the racism and persecution faced by indigenous peoples across North America.

"The lyrical verse herein is as a 'Skyward floating feather, / Sailing on summer air.' And yet that feather may be the eagle plume that crests the head of a warrior chief; so both flint and feather bear the hall-mark of my Mohawk blood." So states Johnson in the foreword to her complete poems, Flint and Feather, a collection that captures not only her range as a poet in tune with the Romantic tradition, but her dualistic sense of identity as a woman of Mohawk and English heritage. Choosing to emphasize the former, Johnson, who also went by Tekahionwake, her great-grandfather's name, adopts the persona of an Indian wife who, watching her love depart, wonders what he will "suffer from the white man's hand." In fear, in anger, in desperation, she proclaims "By right, by birth we Indians own these lands, / Though starved, crushed, plundered, lies our nation low..." In the face of defeat, she offers a poetry in tune with the "ghost upon the shore," the voices one hears "when the Northern candles light the Northern sky." Johnson's voice is thus both one of resistance and mourning, her song one of a land of plains and rivers, of fields that await the harvest despite the "prying pilot crow" whose "thieving raids" descend " a]t husking time."

With a beautifully designed cover and professionally typeset manuscript, this edition of E. Pauline Johnson's Flint and Feather is a classic of Canadian literature reimagined for modern readers.