Coup in Dallas: The Decisive Investigation into Who Killed JFK (Hardcover) 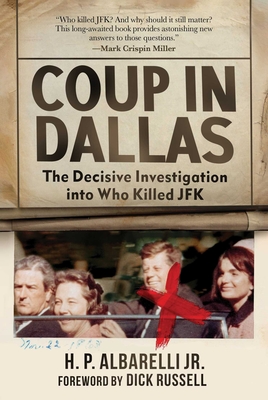 The CIA, Dallas, and the Hard Details of the JFK Assassination

Coup in Dallas leaves speculation and theory aside to give the hard details of who killed President John F. Kennedy and how the assassination plot was carried out.

Through exhaustive research and newly translated documents, author H. P. Albarelli uncovers and explains the historical roots of state-sponsored assassination, finding disturbing parallels to the assassination of JFK. Albarelli goes beyond conventional JFK assassination theory to piece together the biographies of the lesser-known but instrumental players in the incident, such as Otto Skorzeny, Pierre Lafitte, James Jesus Angleton, Santo Trafficante, and others.

Albarelli provides shocking detail on the crucial role that the city of Dallas and its officials played in the maintenance of Dallas as a major hub of CIA activity, and how it led to JFK’s assassination and its cover-up.

Go beyond LBJ, Lee Harvey Oswald, and Jack Ruby, and read the full, definitive account of what happened on November 22, 1963—and how it came to fruition.

Dick Russell has written for such varied publications as Time, Sports Illustrated, and the Village Voice.His books include The Man Who Knew Too Much, Black Genius, and On the Trail of the JFK Assassins. He is also the coauthor of several New York Times bestsellers, including American Conspiracies, 63 Documents the Government Doesn't Want You to Read, and They Killed Our President.

“Remarkable! ... Truly, this is an epic study that will stand the test of time.”
—Dick Russell, investigative journalist and bestselling author of On the Trail of the JFK Assassins and They Killed Our President

“Notes in a dead man’s diary. Dark mischief? Or, as H. P. Albarelli writes, vital clues pointing to the true assassins of President Kennedy? Persuaded or not, readers will be gripped by his herculean research.”
—Anthony Summers, author of Not in Your Lifetime

“Who killed JFK? And why should it still matter? This long-awaited book provides astonishing new answers to those questions. What occurred that day in Dallas was, indeed, a coup—a coup meticulously carried out by fascist zealots still devoted to the cause that was ostensibly defeated with the fall of Mussolini's Italy and Nazi Germany. Backed by a global network of almighty private interests, abetted by covert state agencies, and with their every trace expertly hidden by the cover story blared throughout the media, they killed America's young president, and left American democracy for dead. Thus, Coup in Dallas is a necessary book not just for JFK researchers, but for all who want to know how the United States became a nation under permanent 'emergency' conditions, ruled by mandates and decrees.”
—Mark Crispin Miller, professor of media studies at New York University; editor, News from Underground, markcrispinmiller.com

“Albarelli tirelessly worked the shadows where academic scholars feared to tread and other seekers lost their way, a shining torch for truth.”
—Michael J. Briggs, former editor-in-chief University Press of Kansas, publisher of The Zapruder Film and Breach of Trust

“An impressive and staggering piece of investigative journalism. Based upon the jotted-down notations found in the 1963 Datebook of an amoral clandestine government henchman, we now know the identities of some of the planners and perpetrators of the Crime of the Century.”
—J. Gary Shaw, coauthor of Cover-Up, cofounder JFK Assassination Information Center, ASK, and founding member of AARC
“Mind-boggling. . . A fascinating compendium of new information which I will consult extensively in my own continuing JFK work.”
—Russ Baker, investigative journalist and historian, bestselling author of Family of Secrets, editor-in-chief of WhoWhatWhy, currently engaged in a two-decade JFK book research project

“When respected investigative journalists raise questions about political and social forces that gained substantial power advantages following the assassination of JFK, their work should not be dismissed lightly. Using an academic perspective, this compelling study examines the forces that likely influenced the 1963 assassination of President John F. Kennedy. If you believed that Kennedy was a traitor, then his assassination becomes an act of patriotism. Earlier forms of reactionary information systems, substantially (but not exclusively) on the political right, identified him as such, and as a threat to democracy. Decades later, the same forces motivated the insurgents that stormed the US Capitol in defense of the 45th president demanding a second term. As presented in Coup in Dallas, a similar network of conspiracist rightist mindset provided the script of liberal treason and betrayal that prompted the assassination of President Kennedy.”
—Chip Berlet, editor of The Assassination Please Almanac, author of Eyes Right!, coauthor of Right-Wing Populism in America