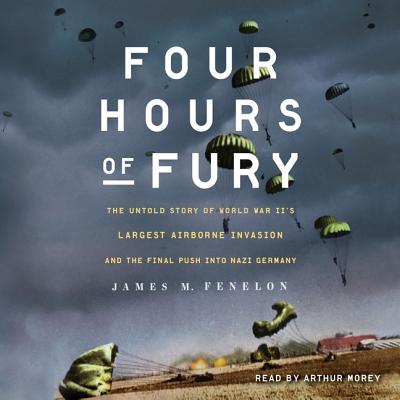 By Arthur Morey (Read by), James M. Fenelon
This Book Is Not Sold Online - Inquire In Store
Not In Stock/Special Order

In this viscerally exciting account, a paratrooper-turned-historian reveals the details of World War II's largest airborne operation--one that dropped 17,000 Allied paratroopers deep into the heart of Nazi Germany.

On the morning of March 24, 1945, more than two thousand Allied aircraft droned through a cloudless sky toward Germany. Escorted by swarms of darting fighters, the armada of transport planes carried 17,000 troops to be dropped, via parachute and glider, on the far banks of the Rhine River. Four hours later, after what was the war's largest airdrop, all major objectives had been seized. The invasion smashed Germany's last line of defense and gutted Hitler's war machine; the war in Europe ended less than two months later.

Four Hours of Fury follows the 17th Airborne Division as they prepare for Operation Varsity, a campaign that would rival Normandy in scale and become one of the most successful and important of the war. Even as the Third Reich began to implode, it was vital for Allied troops to have direct access into Germany to guarantee victory--the 17th Airborne secured that bridgehead over the River Rhine. And yet their story has until now been relegated to history's footnotes.

Reminiscent of A Bridge Too Far and Masters of the Air, Four Hours of Fury does for the 17th Airborne what Band of Brothers did for the 101st. It is a captivating, action-packed tale of heroism and triumph spotlighting one of World War II's most under-chronicled and dangerous operations.