The Catalogue of Shipwrecked Books: Christopher Columbus, His Son, and the Quest to Build the World's Greatest Library (Compact Disc) 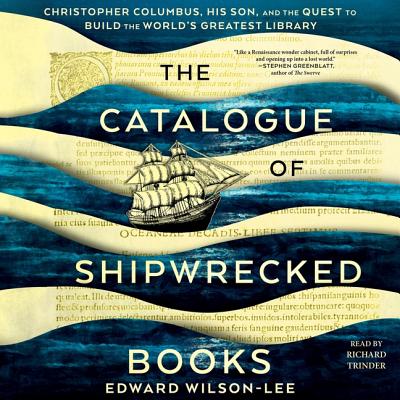 In the tradition of Stephen Greenblatt's The Swerve and Dava Sobel's Galileo's Daughter, a vividly rendered account of the forgotten quest by Christopher Columbus's son to create the greatest library in the world--"a perfectly pitched poetic drama" (Financial Times) and an amazing tour through 16th century Europe.The Catalogue of Shipwrecked Books tells the story of the first and greatest visionary of the print age, a man who saw how the explosive expansion of knowledge and information generated by the advent of the printing press would entirely change the landscape of thought and society. He also happened to be Christopher Columbus's illegitimate son. At the peak of the Age of Exploration, while his father sailed across the ocean to explore the boundaries of the known world, Hernando Col n sought to surpass Columbus's achievements by building a library that would encompass the world and include "all books, in all languages and on all subjects." In service of this vision, he spent his life travelling--first to the New World with his father in 1502, surviving through shipwreck and a bloody mutiny off the coast of Jamaica, and later, throughout Europe, scouring the bookstores of the day at the epicenter of printing. The very model of a Renaissance man, Hernando restlessly and obsessively bought thousands and thousands of books, amassing a collection based on the modern conviction that a truly great library should include the kind of material dismissed as ephemeral trash: ballads, pornography, newsletters, popular images, romances, fables. Using an invented system of hieroglyphs, he meticulously catalogued every item in his library, devising the first ever search engine for his rich profusion of books and images and music. A major setback in 1522 gave way to the creation of Hernando's Catalogue of Shipwrecked Books and inspired further refinements to his library, including a design for the first modern bookshelves. In this illuminating and brilliantly researched biography, Edward Wilson-Lee tells an enthralling story of the life and times of the first genius of the print age, a tale with striking lessons for our own modern experiences of information revolution and globalization.