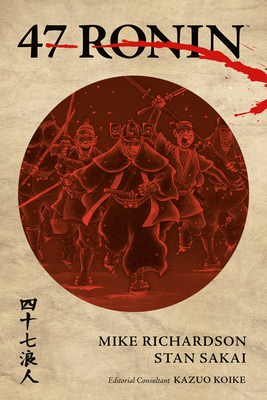 Japan's enduring national legend comes to comics! The tale of the 47 Ronin and their epic mission to avenge their wronged master epitomizes the samurai code of honor, and creators Mike Richardson and Stan Sakai have done justice to their story! Meticulously researched and beautifully illustrated, this collection of the acclaimed miniseries recounts this sweeping saga of honor and violence in all its grandeur. Opening with the tragic incident that sealed the fate of Lord Asano, 47 Ronin follows a dedicated group of Asano's vassals on their years-long path of vengeance!

"If you're a fan of the samurai genre then this is a no-brainer... if you've never given it a chance then this is the perfect gateway book to the genre." Comic Bastards

Mike Richardson is the president and founder of Dark Horse Comics, the award-winning international publishing house he founded in 1986. He is also the president of Dark Horse Entertainment, for which he has produced numerous projects for film and television.

In addition to producing films such as R.I.P.D., Hellboy, and Mystery Men, he has also produced films based on several of his own creations, including The Mask and Timecop. Richardson owns a successful pop-culture retail chain, Things From Another World, with stores stretching from Universal's CityWalk in Los Angeles to his hometown in Milwaukie, Oregon.

Richardson has written numerous graphic novels and comics series, as well as Comics: Between the Panels and Blast Off!, two critically acclaimed books about pop culture. He lives with his wife, Karie, and their dog in Lake Oswego, Oregon.

Stan Sakai was born in Kyoto, Japan, grew up in Hawaii, and now lives in California with his children, Hannah and Matthew. He received a fine arts degree from the University of Hawaii and did further studies at the Art Center College of Design in Pasadena, California. His creation, Usagi Yojimbo, is the story of a samurai rabbit living in a feudal Japan populated by anthropomorphic animals. It first appeared in Albedo Comics in 1984. Since then, Usagi has appeared on television as a guest of the Teenage Mutant Ninja Turtles; and as toys, on clothing, in comic books, and in a series of trade paperback collections. In 1991, Stan created Space Usagi, the adventures of a descendant of the original Usagi, dealing with the samurai in a futuristic setting. Stan is also an award-winning letterer for his work on Sergio Aragonés's Groo: The Wanderer, the Spider-Man Sunday newspaper strips, as well as for Usagi Yojimbo. He is the recipient of a Parents' Choice Award, an Inkpot Award, multiple Eisner Awards, two Spanish Haxturs, an American Library Association Award, and a National Cartoonists' Society Division Award. Usagi Yojimbo Book 12: Grasscutter was used as a textbook in Japanese history classes at the University of Portland.

"47 Ronin is a worthy addition to the library of any fan of Japanese history, medieval warfare or comics." -Medium.com