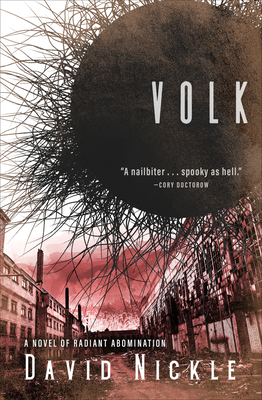 The sequel to Eutopia is "a nailbiter . . . that is spooky as hell, a critical and sharp demolition of Lovecraft's own romanticization of eugenics" (Cory Doctorow, Boing Boing). In Eutopia, an orphaned farm boy and a black physician came face to face with monsters both human--American eugenicists--and inhuman--a parasite called the Juke. Volk is "another dive into the horrific . . . a dazzling horror novel that's unafraid to ask questions and leave some of them unanswered" (Publishers Weekly, starred review).
At the dawn of the twentieth century, Dr. Andrew Waggoner and Jason Thistledown made it out of the Idaho town of Eliada alive--but so did the Juke . . . Now, in 1931 Europe, there are those who seek to resurrect the philosophy of the founders of Eliada. Deep in the Bavarian mountains, research has begun on the creature whose seductive poison can be used in the Nazis' quest for a master race. Still struggling with the aftershocks of their encounters with the Juke, Dr. Waggoner has become the head of a secret society in Paris dedicated to the monster's destruction, while Thistledown is a veteran World War I pilot. Drawn back together to fight the evil that is brewing, they will be forced to confront the diabolical plans of those who will stop at nothing to reshape humanity--and the one being capable of destroying it completely . . . "The most intellectually provocative horror novel of the twenty-first century." --Toronto Star
" Volk] cements David Nickle's reputation as one of the leaders of his generation of writers." --John Langan, award-winning author of The Fisherman

David Nickle is an award-winning Toronto-based author and journalist. He has written several novels and numerous short stories. Nickle's most recent book is Volk: A Novel of Radiant Abomination (2017).