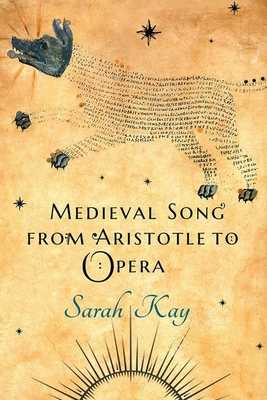 Focusing on songs by the troubadours and trouv res from the twelfth to the fourteenth centuries, Medieval Song from Aristotle to Opera contends that song is not best analyzed as words plus music but rather as a distinctive way of sounding words. Rather than situating them in their immediate period, Sarah Kay fruitfully listens for and traces crosscurrents between medieval French and Occitan songs and both earlier poetry and much later opera. Reflecting on a song's songlike quality--as, for example, the sound of light in the dawn sky, as breathed by beasts, as sirenlike in its perils--Kay reimagines the diversity of songs from this period, which include inset lyrics in medieval French narratives and the works of Guillaume de Machaut, as works that are as much desired and imagined as they are actually sung and heard.

Kay understands song in terms of breath, the constellations, the animal soul, and life itself. Her method also draws inspiration from opera, especially those that inventively recreate medieval song, arguing for a perspective on the manuscripts that transmit medieval song as instances of multimedia, quasi-operatic performances.

Medieval Song from Aristotle to Opera features a companion website (cornellpress.manifoldapp.org/projects/medieval-song) hosting twenty-four audio or video recordings, realized by professional musicians specializing in early music, of pieces discussed in the book, together with performance scores, performance reflections, and translations of all recorded texts. These audiovisual materials represent an extension in practice of the research aims of the book--to better understand the sung dimension of medieval song.

Sarah Kay is a Life Fellow of Girton College, University of Cambridge, and Professor Emerita at New York University. She is the author of Animal Skins and the Reading Self in Medieval Latin and French Bestiaries and Parrots and Nightingales.