The Nature of the Religious Right: The Struggle Between Conservative Evangelicals and the Environmental Movement (Hardcover) 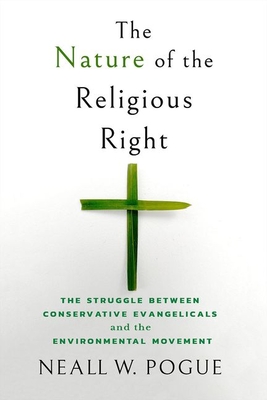 By Neall W. Pogue
This Book Is Not Sold Online - Inquire In Store

In The Nature of the Religious Right, Neall W. Pogue examines how white conservative evangelical Christians became a political force known for hostility toward environmental legislation. Before the 1990s, this group used ideas of nature to help construct the religious right movement while developing theologically based, eco-friendly philosophies that can be described as Christian environmental stewardship. On the twentieth anniversary of Earth Day in 1990, members of this conservative evangelical community tried to turn their eco-friendly philosophies into action. Yet this attempt was overwhelmed by a growing number in the leadership who made anti-environmentalism the accepted position through public ridicule, conspiracy theories, and cherry-picked science.

Through analysis of rhetoric, political expediency, and theological imperatives, The Nature of the Religious Right explains how ideas of nature played a role in constructing the conservative evangelical political movement, why Christian environmental stewardship was supported by members of the community for so long, and why they turned against it so decidedly beginning in the 1990s.

Neall W. Pogue is an Assistant Professor of Instruction at the University of Texas at Dallas.