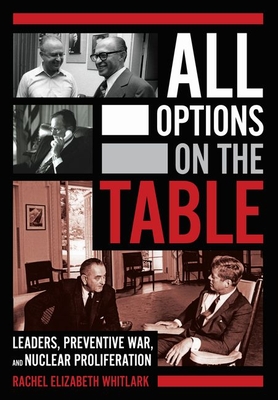 When is preventive war chosen to counter nuclear proliferation? In All Options on the Table, Rachel Elizabeth Whitlark looks beyond systemic and slow-moving factors such as the distribution of power. Instead, she highlights individual leaders' beliefs to explain when preventive military force is the preferred strategy. Executive perspective--not institutional structure--is paramount.

Whitlark makes her argument through archivally based comparative case studies. She focuses on executive decision making regarding nuclear programs in China, North Korea, Iraq, Pakistan, and Syria. This book considers the actions of US presidents John F. Kennedy, Lyndon B. Johnson, George H. W. Bush, Bill Clinton, and George W. Bush, as well as Israeli prime ministers Menachem Begin, Yitzhak Rabin, and Ehud Olmert. All Options on the Table demonstrates that leaders have different beliefs about the consequences of nuclear proliferation in the international system and their state's ability to deter other states' nuclear activity. These divergent beliefs lead to variation in leaders' preferences regarding the use of preventive military force as a counter-proliferation strategy. The historical evidence amassed in All Options on the Table bears on strategic assessments of aspiring nuclear powers such as Iran and North Korea. Whitlark argues that only those leaders who believe that nuclear proliferation is destabilizing for the international system will consider preventive force to counter such challenges. In a complex nuclear world, this insight helps explain why the use of force as a counter-proliferation strategy has been an extremely rare historical event.