Macbeth: A Dagger of the Mind (Shakespeare's Personalities #5) (Paperback) 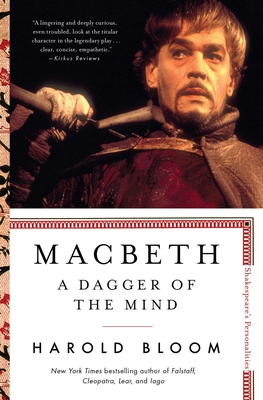 By Harold Bloom
$16.00
Unavailable, Out of Stock, or Out of Print

From Harold Bloom, the greatest Shakespeare scholar of our time, comes a portrait of Macbeth, one of William Shakespeare’s most complex and compelling anti-heroes—the final volume in a series of five short books about the great playwright’s most significant personalities: Falstaff, Cleopatra, Lear, Iago, and Macbeth.

From the ambitious and mad titular character to his devilish wife Lady Macbeth to the mysterious Three Witches, Macbeth is one of William Shakespeare’s more brilliantly populated plays and remains among the most widely read. Macbeth is a distinguished warrior hero, who over the course of the play, transforms into a brutal, murderous villain and pays an extraordinary price for committing an evil act. A man consumed with ambition and self-doubt, Macbeth is one of Shakespeare’s most vital meditations on the dangerous corners of the human imagination.

Award-winning writer and beloved professor Harold Bloom investigates Macbeth’s unthinkable actions with razor-sharp insight, agility, and compassion. He also writes about his shifting understanding—over the course of his own lifetime—of this endlessly compelling figure.

“Acclaimed critic Bloom once again plumbs the depths of a Shakespeare play to reveal new insights [that]…will shift the reader’s perceptions of a literary classic” (Publishers Weekly). “A lingering and deeply curious, even troubled, look at the titular character in the legendary play…this clear, concise, empathetic” (Kirkus Reviews) volume delivers that kind of exhilarating intimacy and clarity in Macbeth, the final book in an essential series.

Harold Bloom is Sterling Professor of Humanities at Yale University. He has written more than sixty books, including Cleopatra: I Am Fire and Air, Falstaff: Give Me Life, The Western Canon, Shakespeare: The Invention of the Human, and How to Read and Why. He is a MacArthur Prize fellow, a member of the American Academy of Arts and Letters, and the recipient of many awards, including the Academy’s Gold Medal for Criticism. He lives in New Haven, Connecticut.

Praise for Macbeth: A Dagger of the Mind:

“The venerable and prolific literary scholar completes his Shakespeare's Personalities series with a lingering and deeply curious, even troubled, look at the titular character in the legendary play… Throughout, the author muses on Macbeth's ‘proleptic and prophetic imagination’ and wonders—all the way to the final paragraph—what it is about this sanguinary, murderous character that so deeply appeals to audiences… Older readers may wish this clear, concise, empathetic volume were available when they were in school.” —Kirkus Reviews

“Acclaimed critic Bloom once again plumbs the depths of a Shakespeare play to reveal new insights, this time offering a richly detailed character sketch of Macbeth. . . Bloom will shift the reader’s perceptions of a literary classic.”—Publishers Weekly

Praise for Iago: The Strategies of Evil

"There are few readers more astute than Bloom...the true value of Bloom’s sensitive reading lies in his ability to articulate his emotional response to the play. He leaves readers with a memorable new perspective on Othello."—Publishers Weekly

Praise for Lear: The Great Image of Authority

“At the outset of this pithy exegesis of King Lear, Bloom describes the play’s title characters as one of Shakespeare’s ‘most challenging personalities’…Bloom guides the reader scene by scene through the play, quoting long but well-chosen swaths of text and interjecting commentary that reveals the nuances of Shakespeare’s word choices…he is also deft at bringing out dramatic contrasts between characters…Bloom’s short, superb book has a depth of observation acquired from a lifetime of study, and the author knows when to let Shakespeare and his play speak for themselves.”—Publishers Weekly

"A measured, thoughtful assessment of a key play in the Shakespeare canon...Bloom brings this dark tale of a king in search of love to life via his incisive close reading of the text.”—Kirkus Reviews

Praise for Cleopatra: I Am Fire and Air

“Bloom draws upon his extensive reading to place the characters and the story in context alongside the histories from which the plot was adapted…those who have read the play or seen it performed will find Bloom’s passion to be infectious. Recommended for Shakespeare enthusiasts and readers seeking a deeper understanding of one of his greatest creations.” —Library Journal

“Bloom brings considerable expertise and his own unique voice to this book.”—Publishers Weekly

Praise for Falstaff: Give me Life

"Famed literary critic and Yale professor Bloom showcases his favorite Shakespearian character in this poignant work... He has created a larger-than-life portrait of a character who is 'at his best a giant image of human freedom.'"—Publishers Weekly

“[Bloom’s] last love letter to the shaping spirit of his imagination… An explanation and reiteration of why Falstaff matters to Bloom, and why Falstaff is one of literature’s vital forces… A pleasure to read.”—Jeanette Winterson, New York Times Book Review