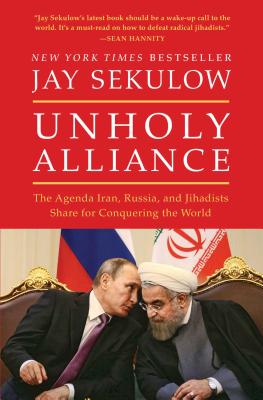 By Jay Sekulow
$16.00
Unavailable, Out of Stock, or Out of Print

The New York Times bestselling author of Rise of ISIS exposes the dangers of radical Islam and the effects it has on the American way of life in this informative and eye-opening new book.

In Unholy Alliance, Jay Sekulow highlights and defines the looming threat of radical Islam. A movement born in Iran during the Islamic Revolution in 1979, radical Islam has at its heart the goal of complete world domination. As this movement has grown, Iran has entered into alliances with Syria and Russia, leading to a deadly game of geopolitical threats and violence.

Not only will you better understand jihadist terror, but you will also learn about Sharia law—a legal code that removes all personal liberty and is starkly incompatible with the US Constitution. All Muslims are required to follow Sharia—as are all who live in lands controlled by Islam. It is the goal of radical Islam to see Sharia instituted across the globe.

If we are to combat radical Islam’s agenda of domination, we must arm ourselves with knowledge. With carefully researched history, legal-case studies, and in-depth interviews, Unholy Alliance lays out the ideology and strategy of radical Islam, as well as the path we must take to defeat it.

Jay Sekulow is widely regarded as one of the foremost free speech and religious liberties litigators in the United States, having argued twelve times before the US Supreme Court in some of the most groundbreaking First Amendment cases of the past quarter century. As chief counsel of the American Center for Law and Justice (ACLJ), he is a renowned constitutional attorney, an international expert on religious liberty, and an acclaimed and distinguished broadcaster. Jay is a passionate advocate for protecting religious and constitutional freedoms with an impressive track record of success. His steadfast determination and commitment to protecting these freedoms is expansive with his work resulting in a lasting impact across America and around the world. He is a member of President Donald Trump’s legal team, and he is also a popular talk radio host and regularly appears on major media, including Fox News, CNN, ABC, NBC, CBS, and other outlets.