Napa at Last Light: America's Eden in an Age of Calamity (Hardcover) 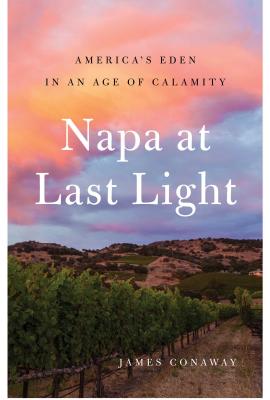 By James Conaway
$26.00
Unavailable, Out of Stock, or Out of Print

A New York Times bestselling author reveals how the beautiful, isolated Napa Valley wine region of California exploded into an extraordinary outsized version of the American dream and whose vineyards sparked an unbelievable power struggle between old family stewardship and multinational corporations.

Not so long ago, wine was an exclusively European product. Now it is thoroughly American; emblematic of Napa Valley, an area idealized as the epicenter of great wines and foods and a cultural tourist destination. But the romanticized accounts you find about it and its denizens is not what you’ll encounter in James Conaway’s candid book.

Napa at Last Light exposes the often shadowy side of the latter days of Napa Valley—marked by complex personal relationships, immense profits, passionate beliefs, and sometimes desperate struggles to prevail. In the balance hang fortunes and personal relationships made through hard work and, in too many cases, manipulation of laws, people, and institutions.

Napans who grew up trusting in the beneficence of the “vintner” class now confront in the twenty-first century multinational corporations and their allies who have stealthily subsumed the old family landmarks and abandoned the once glorious conviction that agriculture is the highest and best use of the land. Inherent in that conviction is the sanctity of the place, threatened now by a relentless drive for profits at the expense of land, water, and even life.

Hailed as the definitive Napa writer, Conaway has spent decades covering the region. Napa at Last Light showcases the greed, enviable profits, legacy, and tradition that still collide in this compelling story. The area is still full of dreamers, but of opposing sorts: those longing for a harmonious society based upon the vine envisioned by Thomas Jefferson more than two hundred years ago, and self-styled overlords yearning for wealth and the special acclaim only fine wine can bring. Bets are still out on what the future holds.

James Conaway is a former Wallace Stegner fellow at Stanford University, and the author of thirteen books, including Napa at Last Light and the New York Times bestseller, Napa: The Story of an American Eden. His work has appeared in The New York Times Magazine, The Atlantic, Harper's, The New Republic, Gourmet, Smithsonian, and National Geographic Traveler. He divides his time between Washington, DC, and California.

"For decades, James Conaway has kept a keen eye on this unusually fecund—and fraught—piece of ground, and has meticulously charted its long, sad decline toward some sort of thematic caricature of itself, a Disney World of the Grape. In this fine book, we see how that decline happened. It’s all here: The titanic egos, the real estate wrangling, the corporate high jinks that, little by little, brought this sun-kissed paradise firmly under the spell of Mammon." —Hampton Sides, bestselling author of Blood and Thunder and In the Kingdom of Ice.

“This is a stunning and sad look at how an idyllic community became a victim of its own success…fascinating and well-researched.”—Publishers Weekly, Starred Review

“Characters lifted from soap operas, environmental degradation born of hubris, and out-of-balance wines that smack of masstige: James Conway has written a gossipy allegory for our profit-drunk times.”—John T. Edge, author of The Potlikker Papers: A Food History of the Modern South