The Japanese Lover: A Novel (Hardcover) 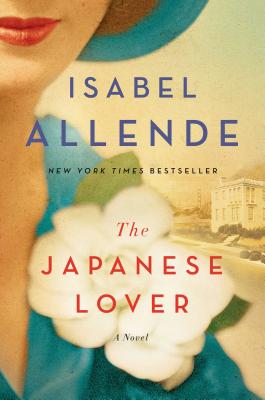 Named one of the most anticipated novels of the year by New York Magazine, The Wall Street Journal, Entertainment Weekly, Cosmopolitan, Harper’s Bazaar, Publishers Weekly, The Huffington Post, and more. From New York Times and internationally bestselling author Isabel Allende, an exquisitely crafted love story and multigenerational epic that sweeps from San Francisco in the present-day to Poland and the United States during the Second World War.

Sweeping through time and spanning generations and continents, The Japanese Lover explores questions of identity, abandonment, redemption, and the unknowable impact of fate on our lives. Written with the same attention to historical detail and keen understanding of her characters that Isabel Allende has been known for since her landmark first novel The House of the Spirits, The Japanese Lover is a profoundly moving tribute to the constancy of the human heart in a world of unceasing change.

"The Japanese Lover is animated by the same lush spirit that has sold 65 million copies of her books around the world... a novel that’s a pleasure to recommend."

"Poignant, powerful ...a timeless world without 'tomorrow or yesterday.'"

"[A] fairy tale of a novel...As in all of Allende's fiction, we find a large, colorful cast of characters..."

“[Allende] is a dazzling storyteller, with a wry, sometimes dark, wit and a great eye for society's changing fashions. She may be writing a fairy tale for adults, but like the best of the genre, it's almost irresistible.”

"Like the incomparable storyteller she is, Isabel Allende does not release us from the novel's spell until the last pages, with a brief but bittersweet hint of her famed magical realism."

"[An] epic novel from a master of the form."

“With The Japanese Lover, Allende reminds us that, while not everyone has a true love, we all have loves that are true. Whether they be passionate, familial, unrequited or timeless,the one constant in our lives is love. And Isabel Allende celebrates them all, beautifully.”

"Allende's engrossing narrative spans 70 years of tumultuous world history, but the powerful message you'll take away is that love -- all kinds of love -- will take root and endure under the most harrowing conditions."

“With her engaging new novel, “The Japanese Lover,” Allende brings us a tale at once global and rooted deeply in Bay Area history, sweeping through time and across continents to explore the inner lives of two very different women in contemporary California.”

“Allende’s magical and sweeping tale focuses on two survivors of separation and loss…Befitting the unapologetically romantic soul bared here—the poignant letters to Alma from Ichimei are interspersed throughout—love is what endures.”

"The Japanese Lover is a poetic and profound meditation on the power of love: a common theme, sure, but in Allende's capable hands this trope is made utterly new."

"Themes of lasting passion, friendship, reflections in old age, and how people react to challenging circumstances all feature in Allende’s newest saga, which moves from modern San Francisco back to the traumatic WWII years. As always, her lively storytelling pulls readers into her characters’ lives immediately… the story has many heart felt moments, and readers will be lining up for it."

"Allende, as always, gives progress and hopeful spirits their due."

"Isabel Allende's oeuvre ranges widely...but The Japanese Lover, her lushly detailed new work, may be her most expansive yet..."

"Allende...delivers a poignant story of race and aging, loss and reconciliation."

"[A] lovely, easy-to-read novel...Like a perfect onion, the book slowly reveals the secrets of Alma’s past, which primarily revolves around a secret, decades-long affair with a Japanese gardener."

"The latest from the writer who's been called Gabriel Garcia Marquez's successor. It's a love story that covers a lot of ground, from Nazi-occupied Poland to present-day San Francisco. You won’t want to put it down."

"...rich with lyrical prose and compelling plot turns. This is Allende at her very best."

"[Allende] is a dazzling storyteller, with a wry, sometimes dark, wit and a great eye for society's changing fashions. She may be writing a fairy tale for adults, but like the best of the genre, it's almost irresistible."

"TheJapanese Lover" erects two thematic pillars of love and prejudice toproduce a story that strikes a masterful emotional balance. More importantly,the novel crafts characters that are profoundly compelling in their complexstruggle to value love despite forces—youth and age, proximity and distance,society and self—beyond their control.”

“She is a dazzling storyteller,with a wry, sometimes dark, wit and a great eye for society’s changingfashions”

“Thespectre of the war and the illicit treatment of Japanese-Americans are neverlost on the reader, although Allende is too subtle a writer to do any realproselytizing. It is a beautiful and significant love story that she tells,although I was so much more interested in her than in Ichimei as a character.”

With end-of-life issues looming over Alma, “The Japanese Lover” can’t be called lighthearted. But it’s often wryly funny, and always an absorbing argument for the power of love.

"'Pretty brilliant,' I said once I closed the cover — literary fiction at its best.”