A Centennial History of the Ecological Society of America (Hardcover) 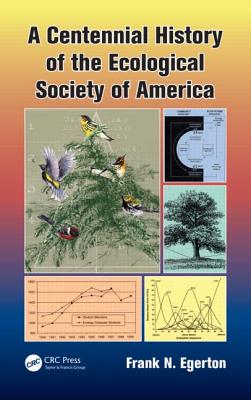 By Frank N. Egerton
This Book Is Not Sold Online - Inquire In Store

Celebrating its 100th anniversary in 2015, the Ecological Society of America (ESA) is the largest professional society devoted to the science of ecology. A Centennial History of the Ecological Society of America tells the story of ESA's humble beginnings, growing from approximately 100 founding members and a modest publication of a few pages to a membership that exceeds 10,000 with half a dozen important journals, in print and online. It is the story of a successful scientific society that set an example for the world.

Beginning with the society's inception, the book describes the difficulties faced early on and ways in which it expanded. It tracks the society's progress from the early years when female ecologists were few and inconspicuous to today when they are equally conspicuous as men, and there are as many or more female graduate students in ecology as male. ESA now has members from all around the world, and its journals contain contributions from around the world.

Like all sciences, ecology began with simple questions that led to fairly simple answers. But, as ecological sciences progressed, complexity emerged in both questions and answers and the ESA has documented that process along the way. This book describes important initiatives such as the International Biological Program, the Long Term Ecological Research Network, and establishing new journals, as well as recent programs including the National Ecological Observation Network. With numerous illustrations, photographs, charts, and diagrams, the book lets you explore the early beginnings of ESA as if in conversation with its founders and appreciate the early work and achievements in the field.

Frank N. Egerton studied biology as an undergraduate at Duke University, and then studied ecology for a year at North Carolina State University, Raleigh, before moving to the University of Wisconsin-Madison, where he earned a Ph.D. in history of science. He taught introductory biology at Boston University for three years, then spent four years at the Hunt Institute for Botanical Documentation, Carnegie-Mellon University, where he edited Edward Lee Greene's Landmarks of Botanical History (2 vols., Stanford University Press, 1983). He moved to the University of Wisconsin-Parkside in 1970 and taught history of science and environmental history until he retired in 2005. He has also published Hewett Cottrell Watson: Victorian Plant Ecologist and Evolutionist (Ashgate, 2003) and Roots of Ecology: Antiquity to Haeckel (University of California Press, 2012). As an emeritus professor, he continues to write an online history of ecology in the ESA's quarterly Bulletin.