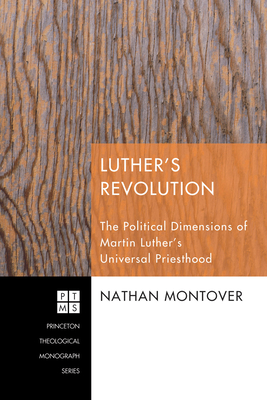 Description: Luther's universal priesthood is, in part, a political doctrine that constitutes a revolutionary strain in Luther's thinking--a strain that can only be described as radical. Luther's political understanding of the universal priesthood posed a challenge to the concrete structures of his day, which were built upon a cosmological foundation that came under attack as a result of the Protestant Reformation. Thus, Luther's universal priesthood was not simply another evangelical concept that dealt with the office of ministry. It also served as the means for reordering the concept of temporal authority and the temporal order. Understood in this way, the universal priesthood had a political dimension that must be acknowledged if it is to be fully understood. Endorsements: ""In Luther's Revolution, Montover presents a creative, compelling explication of the universal scope of Luther's vision of the 'priesthood of all believers, ' for in living out their new life in Christ, both structures of the church and the world will be transformed. The author's use of Luther's 1520 treatise 'To the German Nobility of the German Nation Concerning the Betterment of the Christian Estate' offers a promising model for fruitful engagement of Luther's evangelical theology in the twenty-first century."" --Winston D. Persaud author of The Theology of the Cross and Marx's Anthropology ""Luther's Revolution is a provocative and evocative challenge to those who view Luther as someone who distanced himself from revolutionary politics. Montover offers a compelling and well-documented reading of the political implications of the early Luther's foray into the caste system of the medieval church's conception of the priesthood. His contention is that Luther's call for the universal priesthood of all believers entails not only an ecclesial reformation but a conscientious yet radical subversion of dominant territorial politics and entitlements of the time."" --V tor Westhelle author of The Scandalous God ""In this careful analysis of Martin Luther's 'To the Christian Nobility of the German Nation, ' Nathan Montover affirms the traditional scholarly opinion that the doctrine of the universal priesthood has crucial implications for ecclesiology and the doctrine of ministry. However, he also demonstrates convincingly that Luther addressed the political realm and temporal authority in strategic ways in light of this doctrine. Luther is, therefore, presented as a creative political as well as ecclesiastical and theological reformer."" --Kurt K. Hendel Bernard, Fischer, Westberg Distinguished Ministry Professor of Reformation History Lutheran School of Theology at Chicago ""How was it possible that a man deemed outlaw by the empire and heretic by the papacy could over time become portrayed as a political conservative? Nathan Montover deftly probes the silences in and conventions of Luther research to unveil an alternative figure. Luther's concept of the universal priesthood of all believers, based on careful analysis of his writings, coheres best with a frontal assault on the pope's claims to temporal authority and the dismantling of late medieval political cosmology. Luther emerges from this excellent study as a thoroughly political, prophetic, and revolutionary Christian engaged in the struggle for liberation, drawing radical political consequences from foundational theological claims."" --Craig L. Nessan author of Shalom Church and Beyond Maintenance to Mission About the Contributor(s): Nathan Montover serves as Pastor at St. James Lutheran Church in Bettendorf, Iowa. He also teaches Religion at Augustana College in Rock Island, Illinois, and is an Adjunct Instructor of Reformation Studies at Wartburg Theological Seminary in Dubuque, Iowa.

Nathan Montover serves as Pastor at St. James Lutheran Church in Bettendorf, Iowa. He also teaches Religion at Augustana College in Rock Island, Illinois, and is an Adjunct Instructor of Reformation Studies at Wartburg Theological Seminary in Dubuque, Iowa.