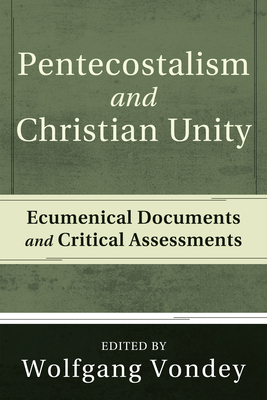 This volume of ecumenical documents, key texts, and critical essays is the first collection of its kind exclusively dedicated to Pentecostalism and its contributions to Christian unity. In the first part, a cadre of internationally renowned scholars addresses the ecumenical heritage and perspectives of the Pentecostal movement since the early twentieth century. Part 2 offers a collection of final reports from international dialogues with Pentecostal participation. The final part contains programmatic essays in response to The Nature and Mission of the Church, a major study on the doctrine of the church published by the World Council of Churches. Most of these essays were first presented by the ecumenical-studies group of the Society for Pentecostal Studies, currently the only organized ecumenical think tank among Pentecostals in North America. Since its formation in 2001, the group has encouraged Pentecostal participation in ecumenical concerns, has hosted Roman Catholic-Pentecostal conversations at the annual meeting of the Society, has invited international scholarly debates on ecumenical matters, and has engaged in the study of ecumenical consensus statements. The essays and documents in this collection model the dedication and commitment among Pentecostals today that engage the challenges and opportunities of Christian unity from the perspective of a tradition that has often been falsely accused of being anti-ecumenical. This collection presents an invaluable resource for teachers, scholars, and pastors interested in engaging the global Christian arena from the worldwide and ecumenical image of Pentecostalism. Contributors Carmelo E. Alvarez Harold D. Hunter Douglas Jacobsen Veli-Matti Karkkainen Frank D. Macchia Raymond R. Pfister Cecil M. Robeck Jr. Paul van der Laan Wolfgang Vondey.