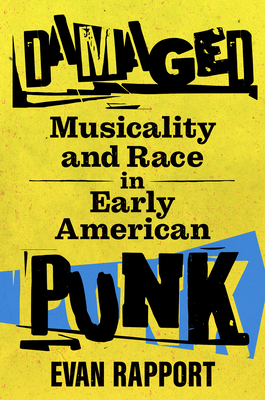 Damaged: Musicality and Race in Early American Punk is the first book-length portrait of punk as a musical style with an emphasis on how punk developed in relation to changing ideas of race in American society from the late 1960s to the early 1980s. Drawing on musical analysis, archival research, and new interviews, Damaged provides fresh interpretations of race and American society during this period and illuminates the contemporary importance of that era. Evan Rapport outlines the ways in which punk developed out of dramatic changes to America's cities and suburbs in the postwar era, especially with respect to race. The musical styles that led to punk included transformations to blues resources, experimental visions of the American musical past, and bold reworkings of the rock-and-roll and rhythm-and-blues sounds of the late 1950s and early 1960s, revealing a historically oriented approach to rock that is strikingly different from the common myths and conceptions about punk. Following these approaches, punk itself reflected new versions of older exchanges between the US and the UK, the changing environments of American suburbs and cities, and a shift from the expressions of older baby boomers to that of younger musicians belonging to Generation X. Throughout the book, Rapport also explores the discourses and contradictory narratives of punk history, which are often in direct conflict with the world that is captured in historical documents and revealed through musical analysis.

Evan Rapport is associate professor of ethnomusicology at The New School. His previous book is Greeted with Smiles: Bukharian Jewish Music and Musicians in New York, about the musical life of Jewish immigrants from Central Asia. He has also published on settings of Persian poetry, arrangements of George Gershwin's concert works, and the idea of ethnic music in New York.