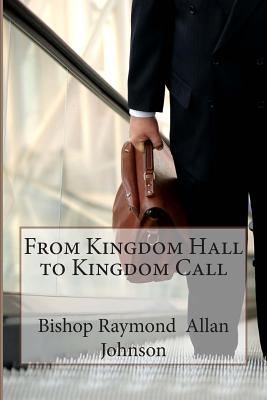 This book is the story of a man who was raised in one of the world's largest and best-known hetero-doxical religions; and walked away to become a minister in the Baptist Church. Bishop Johnson's mother became a Jehovah's witness when he was six months old, so growing up Watchtower doctrine was all he knew. He left the Jehovah's witnesses at the age of twenty-three; and his younger sister left as well, three years later. Watchtower doctrine mandates that all Jehovah's witnesses in good standing must shun anyone who either leaves the organization, or is cast out - even members of one's own family. In the first chapter Bishop Johnson's story begins with a tribute to his late mother; who refused to alienate her children, and probably came under harsh scrutiny as a result. In the book he tells the reader about the Society's controversial disciplinary policy, called "Disfellowshiping;" while at the same time giving the reader a whimsical look at life in the Kingdom Hall he attended for most of his childhood. Bishop Johnson wrote From Kingdom Hall to Kingdom Call to be an inspiration and offer words of encouragement to Jehovah's witnesses; ex-Jehovah's witnesses; student Jehovah's witnesses; and all other seekers to 'The Truth.' As his story draws to a close, he writes: "You might not remember more than half the stories I have told you in this book: a lot of what I have told you has absolutely nothing to do with the 'end story;' but if you take nothing else away from my story, please let it be the deliberateleness by which the Holy Spirit moves us into the path of our destiny, if we are willing to let Him - if we don't try to push back against the tailwind.

Bishop Raymond Allan Johnson is the Chairman of the Apostolic Council for Kingdom Destiny Fellowship International - an interdenominational fellowship of more than 200 U.S., and just as many international churches; headquartered in St. Louis, Missouri. He is the founder and Senior Servant of GlobalDestiny International Ministries, in Detroit, Michigan; and formerly also in Nanchang, Peoples Republic of China. Bishop Johnson was consecrated to the office of Bishop on August 4, 2006. His election to the office came the year before, during the celebration of his thirtieth year in minisry. By the time Presiding Bishop Thomas G. Mitchell approached him to talk to him about his elevation, Bishop Johnson had met and learned from some of the greatest minds in Kingdom ministry; served as an Apostolic Adjutant to two different prominent bishops; mastered his craft - particularly in the areas of Apologetics, Doctrine, Administration, Ecclesiology, and Church Protocol; had writteen Bishop Mitchell's Manual of Protocol; created and been the dean of Detroit Ministers Institute; and planted Destiny Fellowship, a small church that started in a park on the shores of Lake Erie, in Lorain, Ohio. Bishop Johnson declares that writing From Kingdom Hall to Kingdom Call gave him a chance to stop and look back at the unlikely circumstances that brought him to where he is today, in ministry: "Look where He brought me from!"