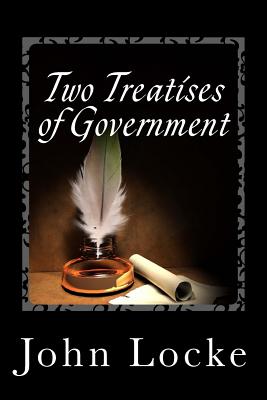 The Treatises of Government, particularly the Second Treatise, are cornerstone works in Western thought. The First Treatise is devoted primarily to demolishing the notion that monarchial rule is divinely sanctioned and is mainly of interest to scholars. The Second Treatise, however, is a fundamental work that can be read profitably by anyone with an interest in philosophy, ethics, and European history. Locke develops an optimistic social contract theory in which men band together to overcome some of the defects of the state of nature. This is the origin of government, which rests on the consent of the governed and is supposed to be in the service of the governed. Locke devotes a fair amount of the Second Treatise to outlining his conception of political power, in many respects a juidicial one, and to a broad discussion of the structure of acceptable governments. While some important aspects of Locke's scheme, notably his affirmation of a social contract theory as the historical basis for government, are clearly wrong, many of his ideas became fundamental to our present ideas of a justified society. The notions of intrinsic human rights and government depending on consent are essential. The Second Treatise is a relatively short work and aspects of interpretation are ambiguous. A very good example is the emphasis on property. Locke is regarded commonly, especially by conservative intellectuals, as the defender of private property strictly construed. There is some justification for this interpretation. On the other hand, in the state of nature at any rate, Locke is quite clear that individuals should use only what they need for reasonable subsistence and he is opposed clearly to social dominance in any society. Locke's view of how economic property is created is quite interesting. In the state of nature at least, property is created by the admixture of human labor with the fruits of the earth. This is a labor theory of value and in Locke's case, the value created has not only an economic component but also a moral dimension. The labor theory of value had a distinguished history in early economic thought and ended up being a prominent component of Marxist political theory. This makes Locke not only an ancestor of 19th century laissez-faire theorist but also of their greatest critic, Karl Marx.

John Locke (1632-1704), widely known as the Father of Classical Liberalism, was an English philosopher and physician regarded as one of the most influential of Enlightenment thinkers. Considered one of the first of the British empiricists, following the tradition of Francis Bacon, he is equally important to social contract theory. His work greatly affected the development of epistemology and political philosophy. His writings influenced Voltaire and Rousseau, many Scottish Enlightenment thinkers, as well as the American revolutionaries. His contributions to classical republicanism and liberal theory are reflected in the United States Declaration of Independence.