The Humor Code: A Global Search for What Makes Things Funny (Compact Disc) 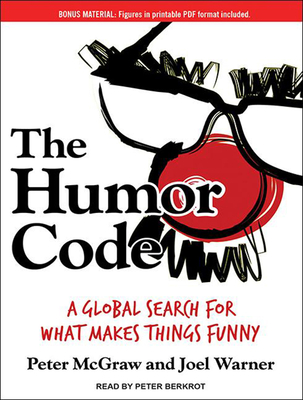 By Peter McGraw, Joel Warner, Peter Berkrot (Narrated by)
This Book Is Not Sold Online - Inquire In Store
Hard to Find

Dr. Peter McGraw, founder of the Humor Research Lab at the University of Colorado Boulder, teamed up with journalist Joel Warner on a far-reaching search for the secret behind humor. Their journey spanned the globe, from New York to Japan, from Palestine to the Amazon. Meanwhile, the duo conducted their own humor experiments along the way-to wince-worthy, hilarious, and illuminating results. In their quixotic search, they questioned countless experts, from comedians like Louis C. K. to rat-tickling researchers, and answered pressing (and not-so-pressing) questions such as, "What's the secret to winning the New Yorker cartoon caption contest?"; "Who has the bigger funny bone-men or women, Democrats or Republicans?"; and "Is laughter really the best medicine?" As a final test, McGraw uses everything they learned to attempt stand-up-at the largest comedy festival in the world. Funny, surprising, and often touching, The Humor Code is a revealing exploration of humor, society, and an unusual friendship.

Peter McGraw, a professor at the University of Colorado Boulder, is a leading expert in the interdisciplinary fields of emotion and behavioral economics. His work has been covered by NPR, "Nightline," the "Wall Street Journal," "Scientific American," the "New York Times," and the BBC. He lives in Boulder, Colorado. Joel Warner, an award-winning former staff writer for "Westword," Denver's alternative newsweekly, has written for "Wired," the "Boston Globe," "Slate," "Grantland," and other publications. He lives in Denver, Colorado.

A veteran of stage and screen, Peter Berkrot held feature roles in "Caddyshack" and Showtime's "Brotherhood." He has recorded over 170 audiobooks, over 100 for children; has been nominated for an Audie Award; and has received a number of "AudioFile" Earphones Awards and starred reviews.