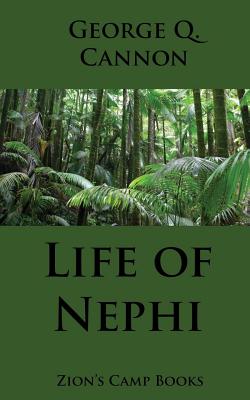 George Q. Cannon, a great gospel scholar and member of the first presidency for many years, wrote this book as a way to explore Nephi's life, as much as was possible at the time. By combining material from the Book of Mormon with archaeological findings, historical writing, and other information about the times Nephi lived in, he presents a compelling portrait of this Nephite prophet. From the author's original introduction: SOME years since the desire took possession of me to write the life of Nephi, the son of Lehi, and, as time and opportunity should permit, the lives of other prominent men of his race of whom we have an account in the Book of Mormon, so as to form a series of biographies for the perusal of the young. My aim was to make the children of our Church familiar with the events described in the Book of Mormon, and with some of the prominent men of that mighty people of which Nephi was one of the greatest progenitors. Various causes-the principal one of which has been the pressure of other and more exacting labors-have prevented me from carrying my design into execution until the present time. I have felt that, as I owed so much of my own success in life to the important and interesting lessons contained in that precious record, it was a duty incumbent upon me to do all in my power to have it read and appreciated as widely as possible by every member of our Church, but especially by the rising generation. The age in which we live is one of doubt and unbelief. Skepticism is spreading. All faith in divine things, as taught by the ancient servants of God, is being unsettled. Man's reason is being extolled as a higher standard than God's revelations. The personality of God, the origin of man and his fall, the atonement of the Savior the places of reward and punishment, known as heaven and hell, and the existence of a personal devil, are all questioned, and, by many members of religious sects denied. Fortunately for us, we are in a position to stem and turn this tide of infidelity, so that it shall not overwhelm our young people. We are not dependent upon the Bible alone for our knowledge concerning these grand, cardinal truths over which the world is stumbling and debating. We have other records-among the most important of which is the Book of Mormon-which corroborate and furnish ample proofs of their heavenly origin. We have the teachings and knowledge of men living in lands far apart and of races widely separated; and they agree in their testimonies, and sustain the divinity of the truths which are taught by the Son of God Himself, and by His inspired servants. The Prophet Nephi, whose life we here present, was one of the greatest and most advanced of these teachers of heavenly truths. There have been but few men, so far as we know, who comprehended, and spoke, and wrote about them as plainly as did he. He had a personal knowledge of the doctrines, principles and facts respecting which men now dispute. He has written fully upon them. And, best of all, it carries within itself the highest evidence of its truth. This is characteristic of his writings, and of all the writings in the Book of Mormon. To every humble, prayerful soul the perusal of that book is a solace. It produces peace and joy, and brings the clear conviction that it is God's word. No arguments are required to prove this. Men have assailed and denounced it; but the indisputable truth still remains that, when read with a meek spirit and a prayerful heart, the testimony of its divine origin descends like refreshing dew from heaven, upon the reader, and he knows, by the Spirit and power of God, that it is His word. That THE LIFE OF NEPHI may have the effect to increase faith, and stimulate inquiry and the more careful perusal of the divine records which the Lord has given to us, is the most earnest desire of THE AUTHOR.