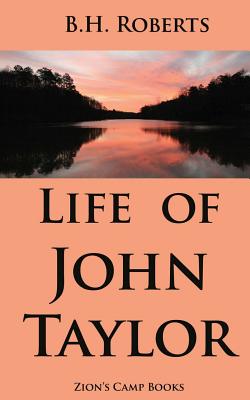 This Zion's Camp Books special edition has been formatted for ease of reading in paperback format with scriptures cited and footnotes included in the text. I hope you enjoy reading it as much as I enjoyed putting it together. From B.H. Robert's original preface: If the preface to a book be looked upon as the author's excuse for writing it, then this book should have no preface, for the author has no excuse to make. Justice to the character and labors of John Taylor demanded that his life be written. The annals of the Church could not be recorded without devoting large space to the part he took in her affairs; but no notice of his life and labors, however extended in a general history, could do justice to his great career: for of course there is much in that career peculiar to himself, and of a character, too, to make it worthy of a separate volume. The author is of the opinion that John Taylor would have had a remarkable history even if Mormonism had not found him; for he possessed those qualities of mind which would have made him a leader and a reformer among men. It is quite probable, too, that in the event of Mormonism not finding him, he would have won more of the honors and applause of men; for while his connection with the Church of Jesus Christ of Latter-day Saints threw him into prominence, the disrepute in which that Church is held brought reproach and odium upon him from the world. Had the courage and unselfish devotion which he brought to the support of Mormonism been given to some reform movement less odious in the estimation of mankind, his conduct would have called forth the highest encomiums from all men; but as those virtues were displayed for the interest and advancement of Mormonism, the world either refused to recognize them at all, or accounted them fanaticism merely, for which no praise was due. The praise of the world, however, is a small matter. It often praises those least worthy; it neglects or abuses those who are its chief benefactors. Our generation like many that have preceded it, garnishes the sepulchres of the ancient prophets, saying, "Had we lived in their day, we would not have persecuted and killed them." And yet with strange inconsistency they hunt to the death the living prophets whose memory future generations will honor. But the praise or censure of the world had little influence over the mind of John Taylor where truth was concerned. The more men despised it the more intense seemed his devotion. In that most beautiful of all his poems entitled "An Irishman's Address to his Mistress"-the poem is an allegory, the mistress is the Irish Catholic Church-Thomas Moore represents the Irishman as saying that through grief and through danger the smile of his mistress had cheered his way, till hope seemed to spring from thorns that round him lay; the darker their fortunes, the brighter their pure love burned, until shame into glory and fear into zeal was turned. The mistress had a rival. That rival was honored, while the mistress was wronged and scorned; her crown was of briars, while gold the rival's brows adorned. The rival wooed him to temples, while the mistress lay hid in caves; the former's friends were all masters, while the latter's, alas were all slaves. "Yet," said the faithful devotee, "cold in the earth at thy feet I would rather be, than wed what I love not, or turn one thought from thee " Such was the love of John Taylor for the Church of Christ to which he devoted his life. The author has but one reason to give for undertaking the pleasing task of writing this book-he loved the subject.