The History, Use, Disposition and Environmental Fate of Agent Orange (Paperback) 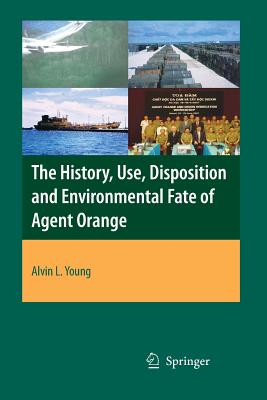 For 40 years, Dr. Alvin L. Young has collected documents, reports, and photographs on the use, disposition, and environmental fate of Agent Orange and other tactical herbicides used in the Vietnam War. He has published or edited four books and more than 70 peer reviewed publications, commentaries, and editorials on the herbicides (and the associated dioxin contaminant) used in Vietnam. He completed his Ph.D. in Herbicide Physiology and Environmental Toxicology at Kansas State University in 1968. He began his Air Force career as a Project Scientist with the United States Air Force in 1968, evaluating both the dissemination characteristics of the Air Force aircraft and the fate of the herbicides used in South Vietnam. In his 21 years with the Air Force (obtaining the rank of Colonel), he was involved with all phases of the Agent Orange controversy, from test and evaluation of equipment to environmental fate and health impacts. During his years as Associate Professor at the United States Air Force Academy (1971-1977), Colorado Springs, Colorado, he conducted studies on the environmental fate of TCDD including studies on the biodegredation of massive quantities of Agent Orange.From 1977-1983, Dr. Young was affiliated with the Epidemiology Division, The School of Aerospace Medicine, Brooks AFB, Texas, and the Environmental Epidemiology Unit of the Department of Veteran Affairs, Washington, D.C. His primary responsibilities were the documentation and establishment of exposure assessment protocols for the epidemiological studies of Vietnam Veterans. From 1983-87, Dr. Young was assigned to the Executive Office of the President, where he provided advice to the White House on the issues of Agent Orange and dioxins. From 1987-1997, he was a Science Advisor for the United States Department of Agriculture. From 1997-2001, he was the Director, Center for Risk Excellence, United States Department of Energy, Argonne, Illinois. From 2002 through 2007 he was a Visiting Professor and Senior Fellow with the Institute for Science and Public Policy, University of Oklahoma, Norman, Oklahoma. He currently is President, A.L. Young Consulting, Inc., Cheyenne, Wyoming. His scientific specialty is the use, toxicology, and human and environmental risks associated with the military herbicides used in South Vietnam, 1961-1972.Dr. Young has traveled, lectured, attended and sponsored conferences and workshops in 32 countries speaking on issues related to Agent Orange and TCDD, ecological studies, environmental toxicology, and biotechnology. He has served as a co-editor for four different journals and has more than 300 publications in the scientific literature. He is currently the Editor-in-Chief of the International Journal Environmental Science and Pollution Research. He maintains a Special Collection on Agent Orange at the USDA's National Agricultural Library, Beltsville, Maryland, at http: //www.nal.usda.gov/speccoll/findaids/agentorange/index.htm.