Punk: The Definitive Guide to the Blank Generation and Beyond (Paperback) 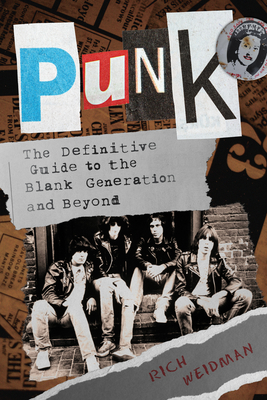 Infused with a raw and energetic sound that stripped rock 'n' roll to the bone, punk rock transformed rock's landscape in the 1970s, deconstructing bloated arena rock and leaving a lasting influence on the music and cultural scene in the United States and overseas. Punk was all about extending a middle finger to the status quo while pushing boundaries in uncharted directions. According to punk poet laureate Patti Smith, "To me, punk rock is the freedom to create, freedom to be successful, freedom to be not successful, freedom to be who you are. It's freedom." Punk: The Definitive Guide to the Blank Generation and Beyond focuses on the origins of punk, ranging from disparate influences such as Dadaism, the Beat Generation, the garage bands of the 1960s, the Paris-based Situationist International movement, Jamaican ska bands, Stanley Kubrick's dystopian masterpiece A Clockwork Orange, and the glam rock of the early 1970s. Rich Weidman highlights the best and worst punk bands, the greatest punk songs and albums, the most notorious concerts, and the rise of American hardcore punk. Legendary venues such as CBGB and classic punk films and documentaries like The Decline of Western Civilization propelled the rise of pop punk bands into the mainstream and every other aspect of punk subculture, including its lasting impact on rock 'n' roll and society as a whole.