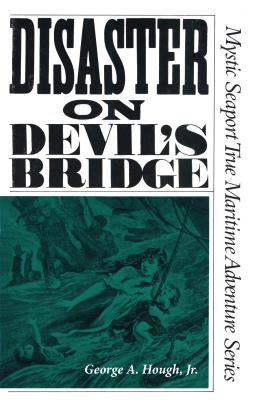 The complete story of the tragic loss of the passenger steamer City of Columbus. In the early hours of January 18th, 1884, the majestic steamship ran aground on the treacherous Devil's Bridge rocks and reef off the Gay Head Cliffs in Aquinnah, Massachusetts near Martha's Vineyard. Of the 45 officers and 87 passengers, only 17 crew and 12 passengers made it back to land, making this shipwreck one of the worst ocean disasters of all time. Reporter George Hough spent years following this story, tracking down survivors and witnesses to piece together the horrific details and tragic mistakes to uncover the mystery of the disaster on Devil's Bridge.

Inheriting the newspaper tradition from his father, one of the best known newspapermen of his day, George A. Hough, Jr., was born in New Bedford in 1894, and knew the old waterfront in its last days of whaling. His maternal grandfather was a Vineyard whaling master, and that island was his summer home for years. Upon graduation from Columbia University's School of Journalism, he became a reporter and re-write man on the New York World, rising to the day city editor's position. In 1929 he became editor and publisher of the Falmouth Enterprise on Cape Cod, beginning an association which has since carried on with his wife and son. His interest in the City of Columbus story was strengthened as he pursued his research.