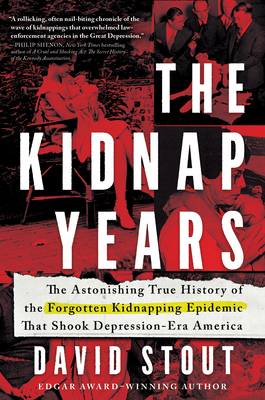 A chilling true crime book that chronicles the wave of abductions that terrorized the U.S. during the Great Depression, including the most infamous kidnapping case in American history.

"A thrilling account that puts the 1932 Lindbergh baby kidnapping case, billed as "the crime of the century," in the context of the thousands of other kidnappings that occurred in the U.S. during the Prohibition and Depression eras...will enthrall true crime fans."—Publishers Weekly, STARRED review

The Great Depression was a time of desperation in America—parents struggled to feed their children and unemployment was at a record high. Adding to the lawlessness of the decade, thugs with submachine guns and corrupt law-enforcement officers ran rampant. But amidst this panic, there was one sure-fire way to make money, one used by criminals and resourceful civilians alike: kidnapping.

Jump into this forgotten history with Edgar Award-winning author David Stout as he explores the reports of missing people that inundated newspapers at the time. Learn the horrifying details of these abduction cases, from the methods used and the investigative processes to the personal histories of the culprits and victims. All of this culminates with the most infamous kidnapping in American history, the one that targeted an international celebrity and changed legislation forever: the Lindbergh kidnapping.

The Kidnap Years is a gritty, visceral, thoughtfully reported page-turner that chronicles the sweep of abductions that afflicted all corners of the country as desperate people were pushed to do the unthinkable.

Fans of The Postman Always Rings Twice and other 30s and 40s American Noir crime novels will be fascinated by the true crime of the times.

Devil in the White City by Erik Larson

The Splendid and the Vile by Erik Larson

Killers of the Flower Moon by David Grann

"Stout reconstructs these long-overlooked cases in rich detail, mining newspaper accounts and interviews with descendants of some of the victims... The Kidnap Years is a captivating journey into the crime that helped to define the Depression era.

"David Stout's The Kidnap Years is not only a riveting, page-turning collection of sensational true crime stories but a brilliant work of social history, a long-overdue examination of one of the most infamous chapters in the annals of American crime—the 1930s kidnapping epidemic." — Harold Schechter, author of Deranged: The Shocking True Story of America's Most Fiendish Killer

"Blending meticulous research, the personal experiences of a seasoned journalist and a reader-friendly prose style, Dave Stout has produced a terrific book. If anyone has the chops to tackle this grim but compelling subject, it is Stout, an Edgar-award winning novelist, the author of other important true crime books and a longtime editor and reporter for the New York Times whose reporting assignments once required him to witness and a write about a state-sanctioned execution. " — Neal Hirschfeld, author of Detective: The Insipirational Story of the Trailblazing Woman Cop Who Wouldn't Quit

"At turns fascinating and heartbreaking, this expertly crafted history is a must-read for true crime aficionados." — Library Journal, STARRED Review

"A fascinating crime book like no other." — David Cay Johnston, Pulitzer Prize-winning journalist

"David Stout's The Kidnap Years is a great read and great history–a rollicking, often nail-biting chronicle of the wave of kidnappings that overwhelmed law-enforcement agencies in the Great Depression. New York Times-veteran Stout sheds important new light on the rise of FBI Director J. Edgar Hoover and on the "Crime of the Century"–the 1932 kidnapping and murder of Charles Lindbergh's baby son." — Philip Shenon, New York Times-bestselling author of A Cruel and Shocking Act: The Secret History of the Kennedy Assassination

"With a page-one eye for detail and trenchant prose, David Stout's The Kidnap Years feels like a Ken Burns documentary about the Depression-era phenomenon of kidnappings ripped from a police detective's whisky-soaked casebook. The spree of often violent abductions victimized the rich and celebrated, turned a few kidnappers into national anti-heroes and helped launch the careers of a generation of crime-fighting lawmen and prosecutors. The stories of these cases are as riveting as they are true." — David Johnston, former New York Times criminal justice reporter and co-author of Betrayal: The Story of Aldrich Ames, an American Spy

"David Stout combines a newsman's savvy and a writer's touch in recounting a chilling and wrenching era in American history. A must-read for true crime aficionados." — Eric Lichtblau, Pulitzer Prize-winning journalist and New York Times bestselling author of The Nazis Next Door

"I feel vaguely guilty about having enjoyed The Kidnap Years so much. A lot of blameless people died and a lot of evil people did terrible things, but David Stout writes with so much innocent enthusiasm that his book is addictive. Using the kidnapping of the Lindbergh Baby as a thread running through the years from the late 1920s to the mid-1930s, we are regaled with stories about gangsters, prohibition, early kidnappers and their victims, the formation and development of the F.B.I., and the passing of the Federal Kidnapping Act of 1932. This can't-put-down book reminds us that virtuoso detective work was done long before the discovery of DNA, and that criminals were being "profiled" well before the term to describe it came into common use." — Shelly Reuben, author of The Boys of Sabbath Street and Tabula Rasa

"A thrilling account that puts the 1932 Lindbergh baby kidnapping case, billed as "the crime of the century," in the context of the thousands of other kidnappings that occurred in the U.S. during the Prohibition and Depression eras... will enthrall true crime fans." — Publishers Weekly, STARRED review

"In this extensively researched and smartly focused true-crime compendium, award-winning Stout delves into the who, what, when, where, and how, if not necessarily the why, of this most frightening and exploitative of ordeals." — Booklist