Truth Seeker: Mormon Scriptures & the Bible: An Interpretation of Another Testament of Jesus Christ (Paperback) 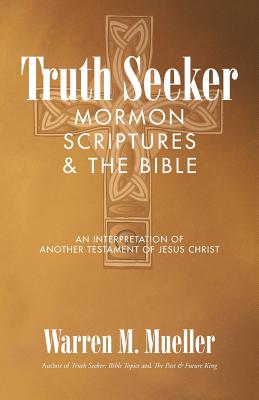 Are Mormons Christians? What do they believe? How do their beliefs compare with other Christian religions?

I have been impressed by the dedication of Mormon missionaries, the beauty of the Mormon Tablernacle Choir and the majestic architecture of Mormon temples. I have known several Mormons and they seem to be family oriented people who live out their faith in tangilble ways. As American culture drifts towards situation ethics and values based on surveys, Mormons are like other Christians in that they tend to be conservative and look to their Church and Scriptures for guidance. This interest and curiosity led me to study Mormon scriptures and compare them with the Bible. Each chapter of Truth Seeker: Mormon Scriptures & The Bible is a summary of each of the books that make up The Book Of Mormon, The Pearl of Great Price and Doctrines & Covenants. This is followed by a discussion of internal inconsistencies, differences from the Bible and historical problems. In order to provide a balanced discussion, the views of a devout Mormon, Dr. Jordan Jensen, are included. Brigham Young University and Latter-day Saint (LDS) web sites were used to answer questions I still had after completing my review and to fill in gaps in my understanding of some doctrines and beliefs. The result of these efforts is a book that provides insights into Mormonism and how it compares and deviates from other Christian churches. The essence of the deviations are founded in the idea that Mormonism extends, clarifies and sometimes replaces Biblical teachings based on revelations given to Joseph Smith and subsequent LDS prophets.