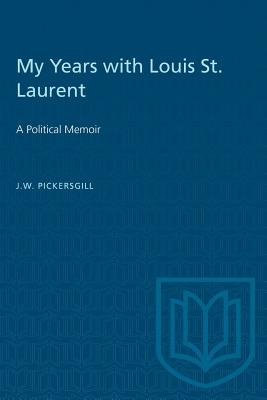 Louis St. Laurent was appointed to the Cabinet in 1941 and seven years later succeeded Mackenzie King as Leader of the Liberal party and as Prime Minister. J.W. Pickersgill was then head of the Prime Minister's Office. 'In a sense, ' he writes, 'King handed me on to St. Laurent with the rest of the furniture.'

Thus began the relationship which is the theme of this book. It portrays St. Laurent's leadership from his initial appointment to his retirement after the 1957 election, and it describes Mr. Pickersgill's own career in the East Block and later as a Member of Parliament and Minister. It relates the changing parliamentary and electoral fortunes of the Liberal party (a long account of what went wrong in the pipeline debate is included), and recalls the legislative achievements of the time, along with many of the considerations behind them. All in all, it offers the reader a history of these years and a frank account of Canadian political life that cannot fail to interest and inform.

Mr. Pickersgill found that he and St. Laurent shared a sense of values about Canada, even though they came from vastly different backgrounds. He also found him an admirable person to work for and with. Clear-sighted, and with a straightforward dignity and integrity, Louis St. Laurent never sought power; but when it came to him, he exercised it with such skill that, for once, under his leadership, Canada seemed an easy country to govern.

Only one so closely associated with St. Laurent could have written a book so fascinating and full of insight.