Toronto During the French Regime: A History of the Toronto Region From Brule to Simcoe, 1615-1793 (Heritage) (Paperback) 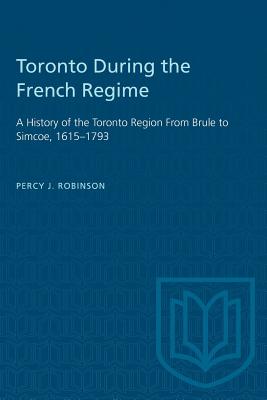 The story of the Toronto Carrying-place, and its r le during the century and a half of French rule before the arrival of Simcoe, is the story of a dramatic and picturesque period in Toronto's past. Sometimes intimately, sometimes remotely, the Toronto Carrying-place was touched by the struggle for the control of the continent waged so long between the French on the St. Lawrence and the Dutch and English on the Hudson.

The history of the region is a fascinating one, and the first full account of it, down to the founding of York in 1793, was written by Percy James Robinson in 1934, at the time of the centenary of the city of Toronto. This valuable record, unavailable for many years, is reprinted now with the addition of later material by the author. Its reappearance will be welcomed by all those interested in the early history of Canada.

Toronto during the French R gime owes its beginning to the author's great interest in the historian Du Creux (whose Historiae Canadensis he had translated from the Latin), to his studies of the early maps of the region, and to his knowledge of the Huron language. He was intrigued, too, with the etymology of the name "Toronto," and he clarifies here the origin of the name, and describes how it travelled south from Huronia to the Toronto area.