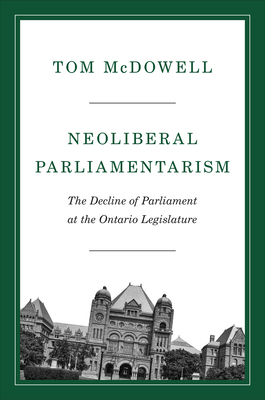 By Tom McDowell
$65.00
Unavailable, Out of Stock, or Out of Print

In Neoliberal Parliamentarism, Tom McDowell provides an alternative approach to understanding the decline of parliament at the Ontario legislature, an approach that highlights the politics of neoliberalism and the significant impact it has had over the last four decades.

Throughout, McDowell offers a structural critique of parliament, claiming that restrictions on the legislature cannot be separated from the ascendance of neoliberalism as the dominant social and policy paradigm in the province. Tracking the evolution of procedure at the Ontario Legislature from 1981 to 2021, McDowell shows that, beginning in the early 1980s, the establishment of increasingly restrictive procedural rules was critical to securing the passage of controversial neoliberal restructuring policies. Further, he argues that the decades-long shift towards de-democratization and the concentration of political power in the executive ought to be understood in the context of neoliberalism's rejection of parliamentary sovereignty and legal positivism.