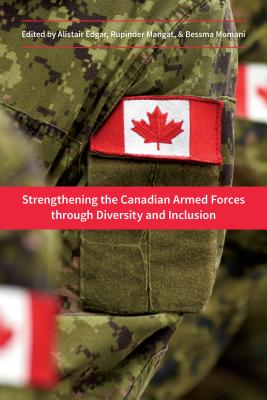 By Alistair Edgar (Editor), Rupinder Mangat (Editor), Bessma Momani (Editor)
$28.95
Unavailable, Out of Stock, or Out of Print

The Canadian Armed Forces has not always embraced diversity and inclusion, but its future depends on it. As the country's demographic makeup changes, its military must adapt to a new multicultural reality and diminishing pools of people from which it can recruit. Canada's population is increasingly urbanized, immigrant, and not necessarily Christian, white, or bilingual. To attract and retain CAF personnel, the military will have to embrace and champion diversity while demonstrating that it is inclusive.

Using a number of cases to highlight both challenges and opportunities, Strengthening the Canadian Armed Forces through Diversity and Inclusion provides a timely look at an established Canadian institution in a rapidly changing world. The editors explore how Canadian Muslim youth, LGBTQ+ individuals, women, racialized minorities, Indigenous communities, and people of non-Christian faiths see their experiences in the CAF. While diversity is a reality, inclusion is still a work in progress for the Canadian Armed Forces, as it is for society at large.