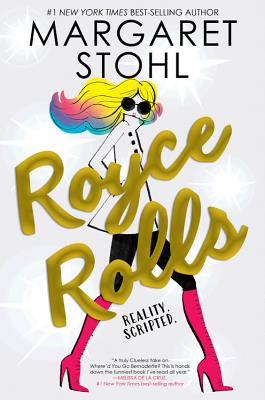 Sixteen-year-old Bentley Royce seems to have it all: an actual Bentley, tuition to a fancy private school, lavish vacations, and everything else that comes along with being an LA starlet. But after five seasons on her family's reality show, Rolling with the Royces, and a lifetime of dealing with her narcissistic sister, Porsche, media-obsessed mother, Mercedes, and somewhat clueless brother, Maybach, Bentley wants out. Luckily for her, without a hook for season six, cancellation is looming and freedom is nigh. With their lifestyle on the brink, however, Bentley's family starts to crumble, and one thing becomes startlingly clear--without the show, there is no family. And since Bentley loves her family, she has to do the unthinkable--save the show. But when her future brother-in-law's car goes over a cliff with both Bentley and her sister's fiancé inside-on the day of the big made-for-TV wedding, no less-things get real.
Really real. Like, not reality show real.
Told in a tongue-in-cheek voice that takes a swipe at all things Hollywood, Royce Rolls is a laugh-out-loud funny romp with an LA noir twist about what it means to grow up with the cameras rolling and what really happens behind the scenes.

Margaret Stohl is the #1 New York Times best-selling co-author of the Beautiful Creatures series. She is also the author of the instant best-seller Black Widow: Forever Red, and its sequel Black Widow: Red Vengeance, or as noted by one television writer, "those little paper things." (The word you're looking for is books.) Growing up in the shadow of Hollywood, Margaret spent her adolescence crank-calling Harrison Ford, living across the hall from a John Waters starlet, and waving to Starline Tours buses as they stopped to take pictures of her P.E. class at Mulholland Hall, where she first met Bentley Royce. These are and are not her stories.

"Stohl creates a laugh-out-loud send-up that pulls back the curtain on the unreality of reality TV."—Publishers Weekly

"Anyone who ridicules celebrity TV shows while secretly watching them will get a kick out of this."—Booklist

"[T]his funny, fast-paced read . . . explores identity, tragedy, and rallying around the people you love. . . . A smart, satirical edge separates this Hollywood chick-lit from many others."—Kirkus Reviews