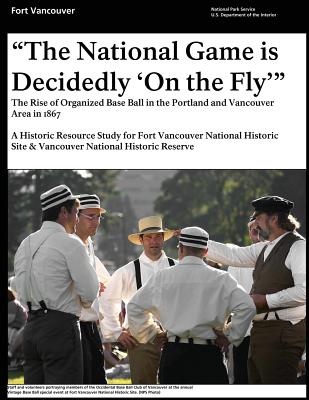 By U. S. Department of the Interior, National Park Service
$13.79

In July 1867, the Oregon City Enterprise reported a peculiar observation from a Portland, Oregon, correspondent. "On several occasions, of moonlit nights," they related, "the police have caught parties engaged in practice on the flat roofs of some of the brick buildings." The same activity provoked protest from at least one Portlander. "In the name of humanity," he wrote to the Portland Morning Oregonian in August, "how long are we to be afflicted with this...nonsense?" Annoyed and dumbfounded by the activity, he openly wondered "of what possible interest can it be to the mass of readers? " Comparing it to "marbles, blind man's bluff, hide and seek, old sister Phoebe," he asked "but who, in the name of reason, would expect to see elaborate weekly reports...in the papers?" "Come now," he chided, "take a second thought and show a little mercy on a NERVOUS MAN." In response, the Morning Oregonian offered little to calm his nerves. "All we know," they opined, "is that the end is not yet; that the National Game is decidedly 'on the fly', and we cannot, considering all the signs of the times, predict for a...'short stop'." What was this activity practiced so widely it even utilized rooftops and evenings as a setting? What activity saturated Portland- area newspapers in the eyes of at least one citizen? What was this growing National Game described by the Morning Oregonian? It was baseball; or rather base ball. In the year 1867, Portland, Oregon, and nearby Vancouver, Washington Territory, along with neighboring communities including Oregon City, Oregon, saw an explosion in the popularity of what had, ten years before, been dubbed America's national past time. From the reported first match game in 1866 between two of the areas first organized clubs-the Pioneer Base Ball Club of Portland and the Clackamas Base Ball Club of Oregon City-the number of teams skyrocketed by July 1867 to a reported seventeen clubs in Portland alone. This study will briefly explore base ball as it existed in the vicinity of the adjacent cities of Portland and Oregon City, Oregon and Vancouver, Washington Territory in 1867. It is not intended to be a comprehensive study; rather, it will explore the organization and administration of these early base ball clubs, and provide additional information regarding two teams that organized in Vancouver that year. With a goal of providing background information to inform the staff and volunteers participating in Fort Vancouver National Historic Site's interpretive and living history activities, including the popular Vintage Base Ball special events, this study will provide preliminary information in several areas.