Attack of the 50 Foot Wallflower (Hardcover) 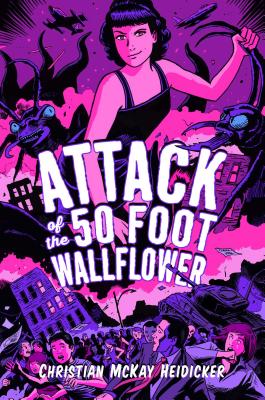 By Christian McKay Heidicker, Sam Bosma (Illustrator)
$18.99
Unavailable, Out of Stock, or Out of Print

From the author of Cure for the Common Universe comes a monster-movie-like novel that bravely challenges perceived notions of beauty, identity, and modern voyeurism.

Phoebe Lane is a lightning rod for monsters.

She and her mom are forced to flee flesh-eating plants, blobs from outer space, and radioactive ants. They survive thanks to Phoebe’s dad—an invisible titan, whose giant eyes warn them where the next monster attack will take place.

All Phoebe wants is to stop running from motel to motel and start living a monster-free life in New York or Paris. But when her mom mysteriously vanishes, Phoebe is left to fend for herself in small-town Pennybrooke.

That's when Phoebe starts to transform…

Christian McKay Heidicker returns with a book unlike any other, challenging perceived notions of beauty, identity, and what it means to be a monster.

Christian McKay Heidicker watched a lot of TV as a kid. (Probably too much.) It disturbs/enthralls him to think that the characters he was watching were sentient. (They probably were.) Attack of the 50 Foot Wallflower is his second novel. His first novel, Cure for the Common Universe, was about how he plays too many video games. Learn more at CMHeidicker.com.

"This book is wild, weird, hilarious, heartfelt, imaginative, and inventive. The spirit of Kurt Vonnegut is alive and well in its pages."
— Jeff Zentner, author of The Serpent King

"This is a wonderful and wholly unique entry in teen horror fiction."
— School Library Journal

"Phoebe is a plucky, snarky heroine, and her fantastic adventure will entertain teens."
— Kirkus Reviews