The Wall of Storms (The Dandelion Dynasty #2) (Hardcover) 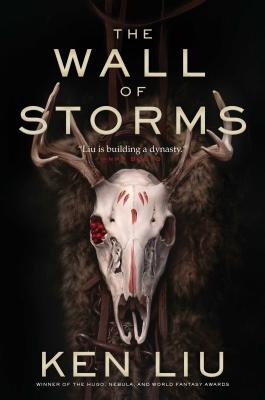 This is book number 2 in the The Dandelion Dynasty series.

One of the Time 100 Best Fantasy Books Of All Time

In the much-anticipated sequel to the “magnificent fantasy epic” (NPR) Grace of Kings, Emperor Kuni Garu is faced with the invasion of an invincible army in his kingdom and must quickly find a way to defeat the intruders.

Kuni Garu, now known as Emperor Ragin, runs the archipelago kingdom of Dara, but struggles to maintain progress while serving the demands of the people and his vision. Then an unexpected invading force from the Lyucu empire in the far distant west comes to the shores of Dara—and chaos results.

But Emperor Kuni cannot go and lead his kingdom against the threat himself with his recently healed empire fraying at the seams, so he sends the only people he trusts to be Dara’s savvy and cunning hopes against the invincible invaders: his children, now grown and ready to make their mark on history.

Ken Liu is an award-winning American author of speculative fiction. His collection, The Paper Menagerie and Other Stories, has been published in more than a dozen languages. Liu’s other works include The Grace of Kings, The Wall of Storms, The Veiled Throne, and a second collection The Hidden Girl and Other Stories. He has been involved in multiple media adaptations of his work including the short story “Good Hunting,” adapted as an episode in Netflix’s animated series Love, Death + Robots; and AMC’s Pantheon, adapted from an interconnected series of short stories. “The Hidden Girl,” “The Message,” and “The Cleaners” have also been optioned for development. Liu previously worked as a software engineer, corporate lawyer, and litigation consultant. He frequently speaks at conferences and universities on topics including futurism, cryptocurrency, the history of technology, and the value of storytelling. Liu lives with his family near Boston, Massachusetts.

"Hugo-winner Liu delivers truly epic fantasy adventure in the magnificent second chapter (afterThe Grace of Kings) of the groundbreaking Dandelion Dynasty series, inspired by the legends surrounding China’s Han Dynasty. Onetime con man Kuni Garu, now Emperor Ragin of Dara, has successfully ruled the island archipelago—and kept the peace—for nearly a decade. But now that Kuni’s sons are old enough to be given official responsibilities, there’s increased scheming at court; Kuni’s not the only one playing the long game. Add in growing civil unrest caused by the heavy hand of tradition behind government appointments, fresh political intrigue brewing offshore, and the sudden appearance of invaders from the north, and Liu has enough plots for five novels. He keeps them all moving like a juggler tossing up bowling balls, boomerangs, and crystal goblets: disaster seems imminent more than once, but somehow everything stays up in the air and gloriously unbroken. Liu’s characters are a delight, the worldbuilding is unusual and impeccable, and the writing is smooth and luminous. This tale of divided loyalties, deadly ambition, and “silkpunk” technology delivers enough excitement and sense of wonder to enchant any fan of epic fantasy."
— - Publishers Weekly (STARRED REVIEW)