Gospel in Latin America: Historical Studies in Evangelicalism and the Global South (Paperback) 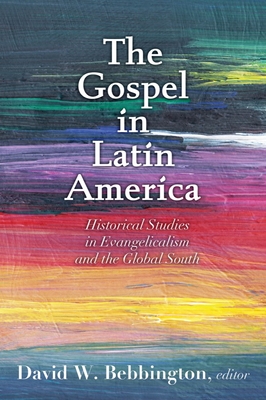 By David W. Bebbington
This Book Is Not Sold Online - Inquire In Store

The shift of the center of gravity in world Christianity from the Global North to the Global South was arguably the most important development in the faith during the twentieth century. One of the most salient dimensions within that broader evolution was the rise of evangelical Protestantism in Latin America, once a Roman Catholic stronghold. In the early twenty-first century a high percentage of Latin America was Pentecostal, but there had also been significant growth of other denominations, including Methodists and Baptists. By 2019 an estimated 19 percent of the population of Latin America identified as evangelicals.

The Gospel in Latin America includes a broad range of studies in the history of Latin American evangelicalism from experts in the field. Five chapters address issues affecting the whole of Latin America, including the relationship of evangelicalism to demography and the rise of the political ideology of Dominionism. A further five concentrate on developments in specific nations such as evangelical intellectual life in Brazil and the forging of evangelical identity in Argentina. Pentecostalism is included, but space is given to the full range of religious groups. Politics is not omitted, but the volume's main concern is the core religious priorities of the movement associated with the spread of the gospel.

David Bebbington is Emeritus Professor of History at the University of Stirling in Scotland. He is the author of Baptists through the Centuries: A History of a Global People, Patterns in History: A Christian Perspective on Historical Thought, The Evangelical Quadrilateral: Characterizing the British Gospel Movement, and The Evangelical Quadrilateral: The Denominational Mosaic of the British Gospel Movement.