The Christians' God Does Not Exist! Yes, He/She Does!: It Is matter that does not exist! (Paperback) 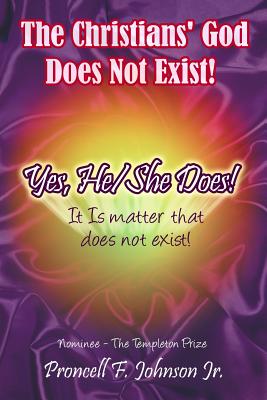 Carl Sagan, popular astronomer, cosmologist, astrophysicist, and astrobiologist wrote: "We are Star Stuff which has taken its destiny into its own hands." The scientific community basically agrees that everything is made of atoms. Proncell F. Johnson Jr. says that they are all wrong Johnson shows that the material universe (along with us mortals) is one big illusion for all things are actually incorporeal/spiritual, the manifestation of the spiritual being we Christians have come to call God. He says that the realization of and utilization of this fact will enable one to duplicate for himself the "so-called" miracles of Christ Jesus in degrees, thus proving the existence of this God, and the non-existence of matter.

Johnson's proof is based upon a law of physics that make it all but impossible to refute as the below reviews confirm.

"This is an important book... Proncell is a man of substance - a deep thinker... I think his nomination for The Templeton Prize is based on the fact that he sits on one side of the spectrum of today's thinkers on mind... It is a Goliath and David battle, but like the shepherd boy, Proncell is going forth to do battle with the giants of today's thinking and saying (respectively) that they are wrong when they claim that everything is made of atoms]." -Paul A. Robinson, Jr., PhD, Physicist.


"Proncell is among the best thinkers in my acquaintance, evident over decade of challenging life experience... I expect his written and spoken ideas to have long-reaching effects enriching lives of which we may never know." -Elaine K. Lang, CS, Christian Science Practitioner, author and speaker.


"This book touches on all the big questions - the nature and infinitude of God, God's creation being the outgrowth of what God is constantly unfolding, man's relationship to God, how the man God created in his image and likeness lives and helps others. He is perhaps the first person to compare these divergent views and present his conclusions in depth." -Marsha H. Middleton, English Teacher, Certified School Librarian. Christian Scientist.

"Dear Proncell, I have read portions of your book and note that you have put a lot of work into it. I wish you success with it." -Laurance R. Doyle, PhD, Physicist, Carl Sagan Center, SETI Institute.

"...this is a man of religion who does not shy away from science but rather actively engages it... it is a wonderful book to sit down and think through." -Corey Kownacki PhD Candidate, Theoretical Particle Physics.

Requests for speaking engagements should be directed to the author at prondor@hotmail.com.